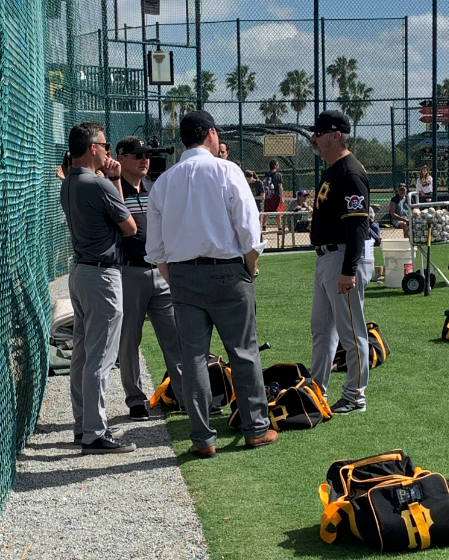 BRADENTON (93.7 The FAN) - Spring Training brings with it the excitement of a new season, but one of the more exciting days in the early parts of Spring Training is the first day of live batting practice.  Today was that day.

It was manager Derek Shelton's first day of live batting practice as the Pirates manager and he talked about how much fun he had, a constant theme so far of Spring Training.

"So much," Shelton said.  "The fun we're wanting to create is in the drills and the purpose and doing that, but to actually get out and to see these guys after just talking to them or watching them on video to actually be out and see them live and see hitters react to them, that's what the great part of early spring training is."

There were the usual household Pirates names throwing live today like Trevor Williams and Mitch Keller, but one name you might not be familiar with really stood out to Shelton.  AA reliever Blake Cederlind.

"Yeah, that was fun to watch today!  It's noisy, it's loud, I mean the ball jumps out of his hand.  Somebody asked, 'What was one fo the more fun things to watch today?'  You get the blonde hair flowing and you get the sinker going, yeah, that was cool to see.  That's the first time actually seeing it live and yeah, that will make you smile."

So after talking with Shelton as a group, I immediately went to Blake Cederlind and told him what his manager had to say about watching him pitch.

"Really?"  Cederlind said in almost disbelief.  "That's incredible.  That makes you feel good.  I hope I made a positive impression.  You only get one, so hopefully it was a good one.  I felt good out there, I felt prepared...everything has just been so great."

On the other end of the spectrum, Shelton liked what he saw from Chris Archer today, and Archer wasn't even one of the pitchers who threw live batting practice.

Archer was spotted behind the net protecting all the new technology the Pirates are using, supporting his teammates, and Shelton noticed.

"It was encouragement, watching young guys.  I think one of the cooler moments for me today, talking about it, was the fact that you saw Arch back there and then you saw Musgrove and Brault and that group of starting pitchers that had been up doing their bunting, and then they're back watching guys.  When you have that kind of unity and comradery, it's a credit to those guys and it's a credit to Oscar [Marin] and Mess {Justin Meccage] that they're creating that environment."

I talked with Archer about this idea of comradery among the pitchers and being in this together.

"We were just looking to support the other guys on the team...Really just to support Cody [Ponce] who I've never seen throw before, support Mitch [Keller], support Trevor [Williams], support some other guys just like to show 'Hey, I'm in your corner.  I'm a part of your support system.'"

Click the audio below to hear more from Shelton on day one of live batting practice among other aspects of today's workouts he took in.