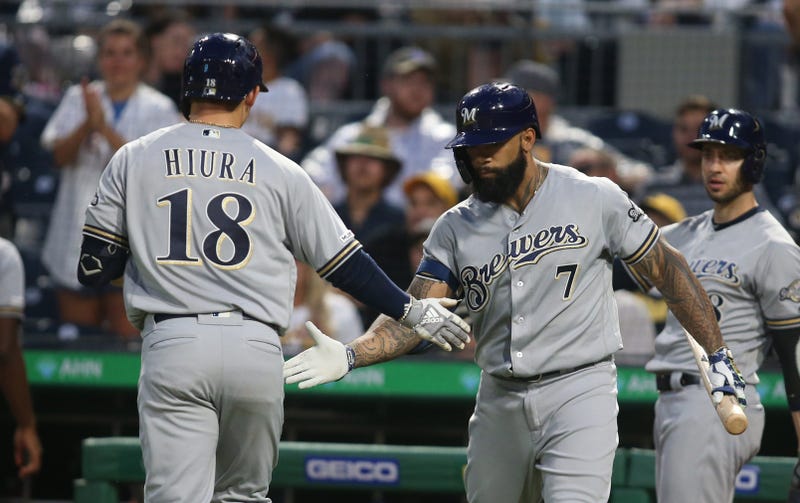 PITTSBURGH (93.7 The Fan) - The Milwaukee Brewers complete the sweep Wednesday night at PNC Park as they defeat the Pittsburgh Pirates 8-3 as the Pirates are now 4-21 since the All Star Break when they were 2.5 games out of 1st in the NL Central.

Brewers second baseman Keston Hiura had another strong performance at the plate at PNC Park as he homered two more times Wednesday night in the 1st and 5th innings and also doubled and came around to score in the 3rd inning.

Jacob Stallings got the Pirates on the board in the 3rd inning with a solo home run to left field and was robbed of what would of been most likely an RBI double in the 5th inning by Brewers left fielder Trent Grisham.

"He's (Grisham's) a good fielder, good player, fast guy, ran over there and made a play," said Stallings. "I couldn't really see it while I was running, but I just heard K.B say something like oh my gosh and I knew he caught it. Stinks, but they got a good team, good outfield defense."

The Pirates cut into the deficit in the 7th inning as Stallings and Kevin Newman came around to score on RBI singles by Bryan Reynolds and Starling Marte, but that would be as close as they would get in the series finale Wednesday night at PNC Park.

Pirates Starting Pitcher Trevor Williams retired the first two batters of the game, but Mike Moustakas doubled and Hiura followed that up with a 2-run home run to right centerfield to the Brewers up 2-0 in the Top of the 1st.

After the success that Williams had against the Brewers last season, he just was never able to get into a groove over his 5 innings of work as the Brewers had traffic on the base pathes in every inning and scored runs in 4 of the 5 innings.

The home run ball has continued to hurt Pirates pitchers all season as the pitchers and catchers continue to try and find an answer to not give up as many home run balls..