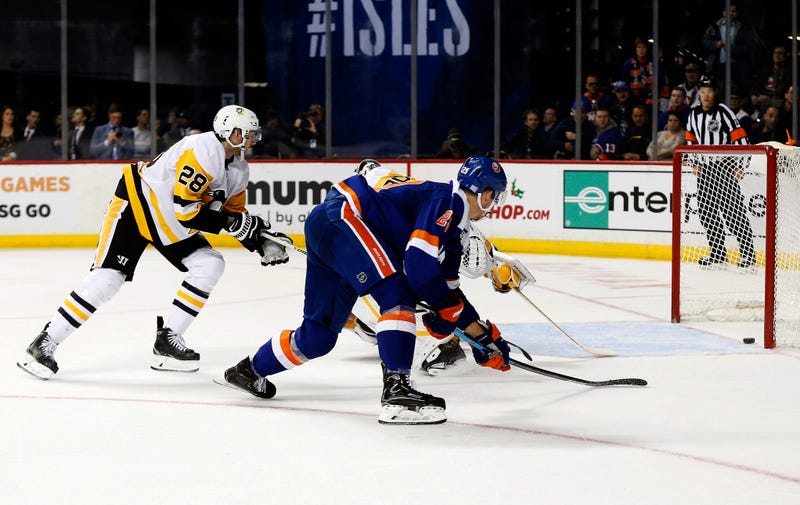 NEW YORK (AP) — Brock Nelson scored his second goal of the game at 4:16 of overtime, lifting the New York Islanders to a 4-3 win over the Pittsburgh Penguins on Thursday night to extend their point streak to a franchise-record 16 games.

Nelson, who also scored the overtime winner at Pittsburgh two nights earlier, got a pass from Mathew Barzal on the left side on a rush, cut across the front of a goal to avoid a defender and draw goalie Matt Murray out of position, and then backhanded it into the right side for his eighth.

Anthony Beauvillier had a goal and an assist, Scott Mayfield also scored, and Barzal had two assists to help the Islanders improve to 15-0-1 during their streak while winning their fifth straight since an overtime loss to the Penguins here on Nov. 7. New York had earned points in 15 straight games three times previously, the last during a 15-game win streak in the 1981-82 season.

Thomas Greiss stopped 23 shots for his eighth straight win — all coming during the Islanders’ streak — and ninth of the season.

Evgeni Malkin had a goal and an assist, and Brian Rust and Patric Hornqvist also scored for the Penguins. Murray finished with 20 saves.

Nelson, playing in his 500th game, gave the Islanders a 3-2 lead with 4:52 left in the third, scoring off a faceoff just 4 seconds after Pittsburgh’s Sam Lafferty was sent off for tripping Beauvillier. Nelson now has four goals and five assists during a five-game point streak.

With Murray pulled for an extra skater, Hornqvist tied it with 30 seconds remaining in regulation.

Malkin had opened the scoring for the Penguins at 1:04 of the first with his fourth. He now has 30 goals and 48 assists in his career against the Islanders.

Only injured teammate Sidney Crosby has more points among active players against the Islanders with 113. Crosby missed his fifth game since having surgery to repair a core muscle injury. The Penguins captain is expected to be absent from the lineup for six weeks.

Mayfield tied it with 4:48 left in the first on a slap shot from the point that eluded Murray. Mayfield’s third of the season.

The Penguins outshot the Islanders 8-5 in the opening period and had a 10-9 advantage in the second.

Rust put the Penguins ahead 2-1 at 1:09 of the second with his eighth of the season and fourth against Islanders in three games. Rust has all of his eight goals plus four assists over the last 11 games. He also scored the overtime winner at Barclays Center two weeks ago, when the Penguins beat the Islanders 4-3.

Beauvillier tied it at 2 with a power-play goal with 8:22 left in the middle period. He scored from a sharp angle along the left boards for his eighth and extended his goal-scoring streak to four games, with six in that stretch.

Derick Brassard, who had an assist on the play, has nine points over the last five games with a goal and eight assists.