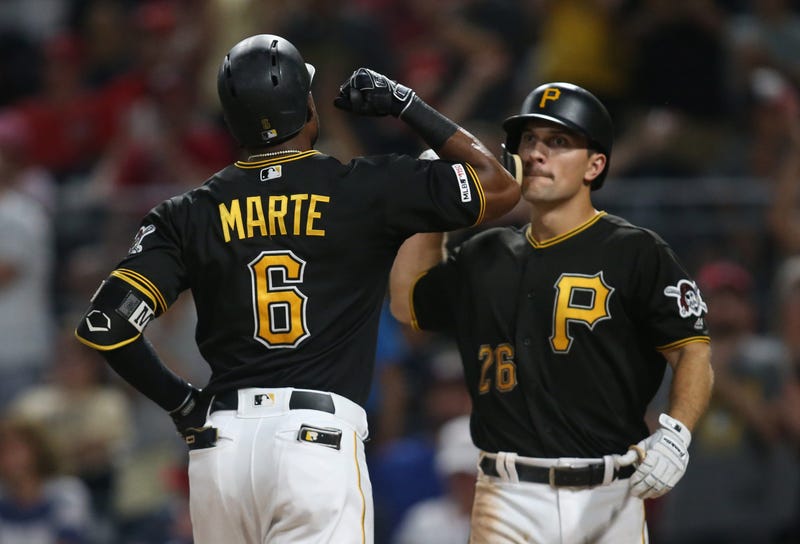 PITTSBURGH (93.7 The Fan) - Pittsburgh Pirates Center Fielder Starling Marte put the Pirates in front with a 3-run home run in the bottom of the 8th inning and made the catch for the final out up against the wall in the top of the 9th to close out the 4-1 victory over the Washington Nationals Tuesday night at PNC Park.

The Pirates have struggled in recent games to score some runs and it looked like it was going to be another one of those nights as the 8th inning started, but the Nationals removed Stephen Strasburg after 7 shutout innings (94 pitches) and turned it over to the bullpen.

Wander Suero allowed a lead-off single to Jacob Stallings, walked Melky Cabrera and Adam Frazier reached on a bunt to load the bases with no one out in the bottom of the 8th. Nationals Manager Dave Martinez brought in Daniel Hudson to try and get out of it, but Bryan Reynolds brought home Steven Brault, who pinch ran for Stallings, on a sacrifice fly and that is what brought Marte to the plate and he promptly put one in the right center field seats.

Marte has been arguably having one of his better, if not best, season's this year and has been one of the Pirates most consistent players when it comes to production since the All Star Break.

news
Did Explosions on the Sun’s Surface Sink the Titanic?
sports
Patrick Mahomes Reveals What He Wants From Lamar Jackson's Game In His Own
news
Dad creates candy chute to prepare for a socially distanced Halloween
i'm listening
I’m Listening: Lily Cornell Silver Knows the Importance of Checking In on Yourself
news
You can now visit the Eisenhower Memorial
music
TikTok Gets Countrified with New Nashville Channel 'The 615 House'