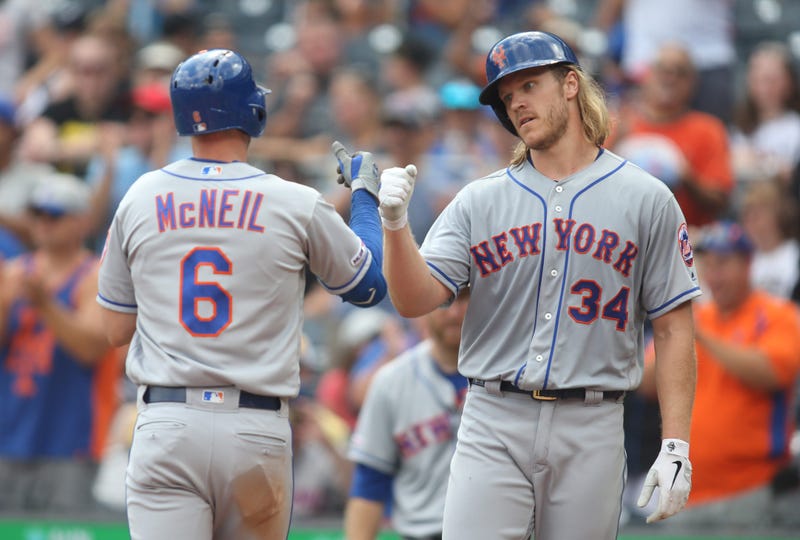 PITTSBURGH (93.7 The Fan) - The New York Mets hit 3 home runs, score 8 off of Joe Musgrove as they rout the Pittsburgh Pirates 13-2 to take 2 of 3 in this weekend series.

Sunday afternoon's game at PNC Park came down to the pitching matchup between Musgrove and Noah Syndergaard as the Mets were able to jump out to a 3-0 lead in the first inning and continued to add on throughout the rest of the game.

On the other side, Mets Starting Pitcher Noah Syndergaard was able to keep the Pirates offense in check as he retired 14 consecutive batters from the last out of the 2nd inning to first out of the 7th inning.

The Pirates begin a 3-game series against the Milwaukee Brewers at PNC Park Monday night when they send Dario Agrazal (2-2, 3.65 ERA) to the mound against Jordan Lyles (6-7, 5.15 ERA) and the Brewers.

news
CDC Walks Back Updated Guidelines That Stated COVID-19 Is Spread Mainly Through the Air
music
Behind the Scenes of Machine Gun Kelly's 'Tickets To My Downfall' Album Cover
music
Someone Tried To Take Trapt To Judge Judy but the Band Says They Will 'Never Go'
music
Maren Morris on Postpartum Depression: 'You Just Feel Like You Suck at Every Level'
news
DOJ Designates NYC 'Anarchist Jurisdiction,' Threatens Loss of Federal Funding
i'm listening
I’m Listening: Thomas Rhett Feels Inspired to Write Music to Help People Get Through Tough Times