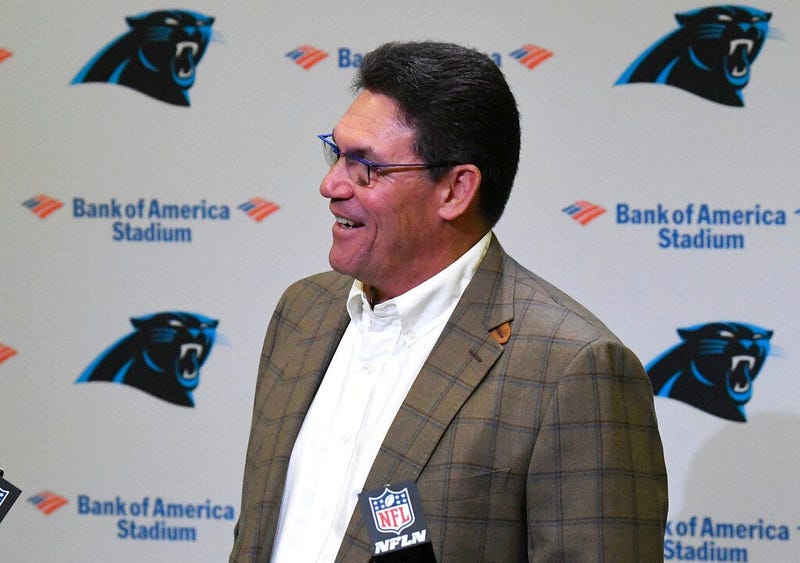 (AP) Judging by the jump start, it looks like we're headed for a ninth consecutive season with at least a half-dozen NFL head coaches getting canned.

The coaching carousel began whirling earlier than usual this season with Jay Gruden getting fired by the Washington Redskins in October after an 0-5 start and Ron Rivera getting dumped this week by the Carolina Panthers (5-7) in the midst of a four-game skid.

They could be joined soon by Jason Garrett in Dallas (6-7), Dan Quinn in Atlanta (3-9), Doug Marrone in Jacksonville (4-8) and Pat Shurmur, whose New York Giants are 2-10, and maybe even by rookie head coach Freddie Kitchens in Cleveland (5-7) and second-year coach Matt Patricia in Detroit (3-8-1).

Rivera was 76-63-1, the most successful of the four head coaches in the Panthers' franchise history. Like John Fox, he guided the Panthers to a Super Bowl only to come up short.

Gruden's six-year run in Washington was the longest for any coach in Daniel Snyder's two decades of ownership, but that run produced a 35-49-1 record, two winning seasons and one playoff appearance.

"Welcome to the club, bro," remarked Raiders coach Jon Gruden, who was fired by the Buccaneers in 2008.

The club will soon be accepting more members. Some strong possibilities:

The Cowboys have lost seven of 10 since a 3-0 start but still lead the middling NFC East by a half game over Philadelphia, which hosts the last-place Giants on Monday night.

"I don't know how it is, we're still in the lead for our division," QB Dak Prescott said after the Cowboys' 31-24 loss at Chicago on Thursday night. "Got to be thankful for that, but we can't hang our hat on that. We have to figure out our issues now, fix them and get better."

Asked Friday on his weekly radio show on 103.The Fan in Dallas if he's embarrassed by how his team is playing, owner Jerry Jones retorted, "Hey, get your damn act together, yourself. Now, we're going to have a good visit this morning, but settle down just a little bit. ... I've been traveling all night and I don't have the patience to jack with you today."

A good many Cowboys fans don't want to wait for Garret's contract to expire after the season for Jones to make a coaching change.

Last year's 7-9 collapse was blamed on injuries, but this year's 3-9 stumble could cost Quinn and general manager Thomas Dimitroff their jobs because of all those empty seats at glittering Mercedes-Benz Stadium.

The Falcons' 26-18 loss to New Orleans on Thanksgiving eliminated them, so December could be all about getting looks at young players, although Quinn said, "It’s always about playing our best to go win. That's the first priority."

The Jaguars have been blown out in four straight games, lopsided losses that crushed the team's playoff hopes and turned December into a debate about the futures of Marrone, personnel chief Tom Coughlin, general manager Dave Caldwell and quarterback Nick Foles.

It's back to rookie Gardner Minshew at QB for the final month. Foles, who signed a four-year, $88 million contract last offseason, said he was going to "keep my head held high."

Things aren't looking up for Marrone.

Expectations in East Rutherford, New Jersey, weren't high, but a return to respectability and a .500 record was a realistic goal for the Giants. Instead, the team might fail to even match last year's five-win total, and that puts Shurmur and general manager Dave Gettleman on notice.

A loss at Philadelphia next Monday night would be the Giants' ninth straight, tying the franchise record for longest skid, set in 1976.

Co-owners John Mara and Steve Tisch haven't spoken publicly about the team since training camp, but back in August, Mara said, "I want to feel when I’m walking off the field after the last game of the season, whenever that is, that this franchise is headed in the right direction."

Kitchens created a stir when he wore a shirt Friday night at the request of his daughters that read, "Pittsburgh started it" before the rematch with the Steelers, which they lost 20-13.

"The T-shirt didn't cause us to give up 40-yard passes," Kitchens said. "We were ready to play. That's the only thing people need to be concerned about."

Baker Mayfield wore a black cap after his last game that read "Miracle," which is what it probably will take for the Browns to salvage a season that began with high hopes and maybe even save Kitchens' job.

The Lions have lost eight of nine since their 2-0-1 start and they've dropped five in a row.

"It’s one of the toughest teams I’ve probably ever been around,” said Patricia, a former Patriots assistant coach. “This team fights like probably no other team I’ve ever seen. We’ve got to find a way to win.”

Patricia is the seventh former assistant of Bill Belichick to get a head coaching job and all of them have losing records except for the Houston Texans' Bill O'Brien (50-42).