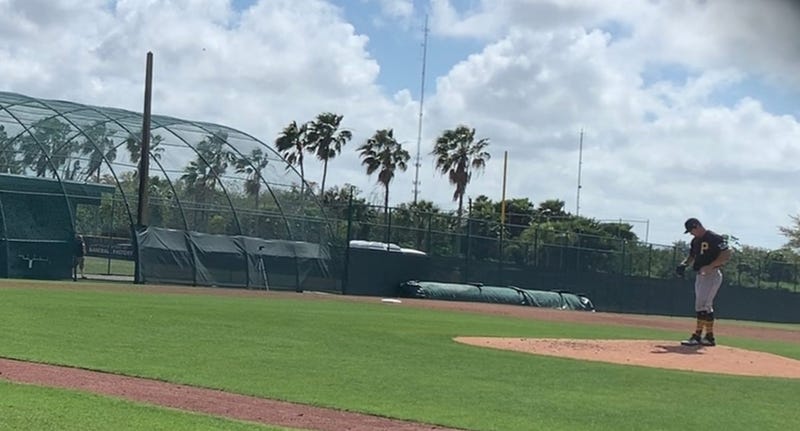 BRADENTON (93.7 The FAN) - 2019 was a rough year for pitcher Derek Holland.  He finished the season with a 6.08 ERA spending time with both the San Francisco Giants and Chicago Cubs.  A reunion in Pittsburgh though could be what helps him return to form.

"I've been very lucky to have a guy like him back on my side" Holland said about pitching coach Oscar Marin.  "I worked with him in Texas when I was rehabbing and we did such a good job of getting me back together where I needed to be and I felt like day one as soon as I got here, he corrected me right away on something that I was doing that was kind of like a flaw."

So what impact has that made for him on the mound as he threw his first live batting practice today?

"Everything else has been coming back together a lot better than I expected."

Holland stressed that the prior relationship with Marin has helped him get back to this point, so I went and talked with Marin to ask what he saw in during today's live batting practice session.

"He didn't really talk about his pitches.  What did it look like?  Was I doing the things that we've been working on?  And he did, he did.  And he was really happy about that."

To hear Holland and Marin talk, you can tell there is a connection between them.  Manager Derek Shelton spoke to that relationship and how that helps them get what they want out of their offseason acquisition.

"One of the connection points of why Oscar does such a good job is because he picks up little things and he knows how to articulate it and he knows how to break it down so everyone understands it.  The fact that he knows him a little bit is able to translate that into how that's going to go out on the mound, that's extremely important to us with Holland and all of our pitchers."

So what did the manager think of Holland's first live session against hitters?

How good is Holland?  We'll see when he starts taking the mound in live spring training games, but for now, he has made a good first impression with his new organization.