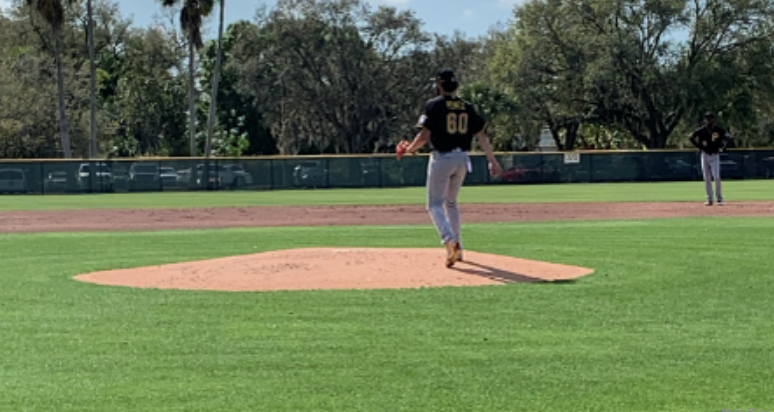 BRADENTON (93.7 The FAN) - After coming to the Pirates in the trade of Jordan Lyles with the Milwaukee Brewers, life got a little hectic for right-handed pitcher Cody Ponce.

The 25-year-old went from AA Biloxi in the Brewers system to AA Altoona in the Pirates system, then promoted to AAA Indianapolis and eventually pitching for Peoria in the Arizona Fall League before getting a shortened offseason.

So sitting in his stall at Pirate City, you might expect to see a guy who has been run through the ringer, but you get quite the opposite.  Ponce is a cool, calm and confident guy.

Asked about the craziness of the past year, Ponce said "Ya it was a whirlwind in the beginning for sure but, being bale to go to the Fall League and ind of meet some of the other guys, then going to the fan fest and meeting more of the guys there as well, it has been very nice."

Speaking of the Arizona Fall League, Ponce worked as a starter there after working as a starter once in the Pirates organization, but prior to that, the past year in Milwaukee were spent as a reliever.  Another potential whirlwind in his career.

"It wasn't too bad," Ponce said about switching from reliever to starter in the same season.  "Going back to becoming a starter was nice because that was what I started with but I have no problem being a reliever either.  They're both two different animals, but they're both very fun to do."

So have the Pirates given him any indication as to how they want to use him this year?

Along for the ride is a good way to describe Ponce over the last year and that very attitude will help him as he works through his first big league camp.

Click the audio link below to hear more from Ponce about working with the new technology the Pirates have introduced this year, his prior exposure to it and what it's like being Cole Tucker's roommate as they're staying together this spring after being roommates at AAA last year.