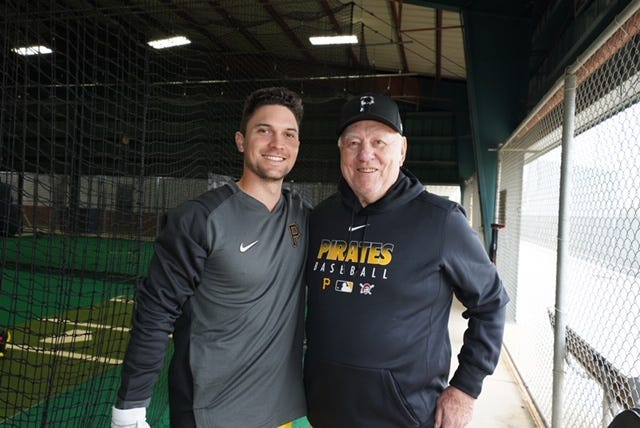 BRADENTON (93.7 The FAN) - He may not have managed his first game yet as the Pirates manager, but that doesn't mean that first year skipper Derek Shelton hasn't already spent some time brushing up on the big time names that have work the Pirates uniform.

So far in spring training we have seen Bill Mazeroski, Manny Sanguillen, John Candelaria and Omar Moreno, and Shelton has a unique appreciation for each.

Shelton added that it did take some convincing to get Maz into camp this year.

"I can't thank him enough.  When I talked to him this winter about coming in, I don't know if I begged him or not, but the fact that he's here is awesome.  I'm really excited too."

Maz just showed up on Friday, but the group of Manny Sanguillen, John Candelaria and Omar Moreno showed up earlier this week and you could tell how much it meant to Shelton to have them here.

"To have those guys here and the fact that they're taking the time to be around our guys, I think it's really cool."

And you could tell that Shelton had already done his homework on all three guys.

"Our guys should talk to them.  I mean Manny Sanguillen is sitting behind and we're talking about a guy who that's a .296 lifetime hitter.  You talk about Candy who has thrown a no-hitter and Omar who caught the last out of a World Series...the one thing I told our group today is at some point I hope they're one of the Pirates alumni that are sitting in a room with another group."

Click the audio link below to hear more from Shelton on what this group of alumni means to him.