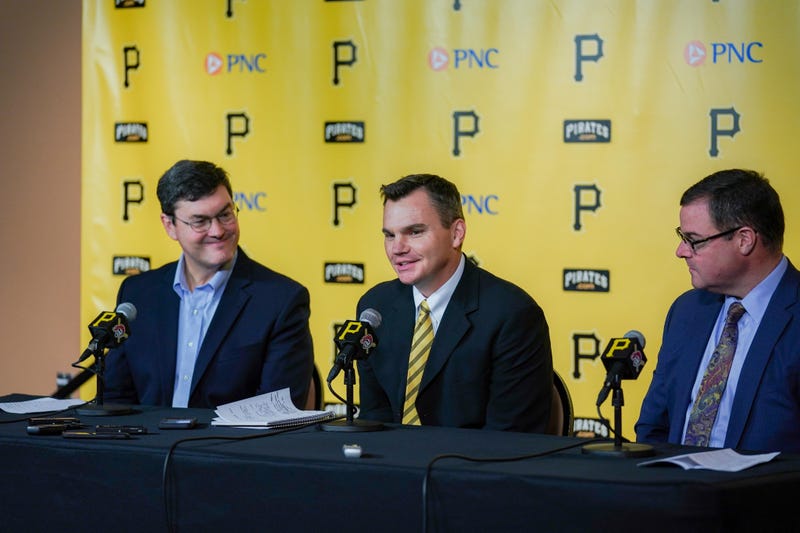 Photo credit @Pirates on Twitter
By Kraig Riley 93.7 The Fan

BRADENTON (93.7 The FAN) - Since they traded Starling Marte to the Arizona Diamondbacks, the Pirates have been on the hunt for another outfielder to throw in the mix.  Little did anyone expect that it would be a former Dimondback that would be tasked with filling the void.

The Pirates officially announced the signing of free-agent outfielder Jarrod Dyson and General Manager Ben Cherington shared with us what they found most attractive about the 35-year-old.

"Particularly someone who could play center field," is what Cherington said they were looking for, and Dyson checks that box.  "The left hand bat we felt complimented the group we have here a little bit better than some of the other free-agent options, so excited that Jarrod is here and getting to know him."

The assumption is that Dyson will be the starting center fielder, but Cherington wasn't ready to make that announcement.

"I want Shelty [Derek Shelton] to make the lineup out and make that decision.  We see him as a guy that can play a good amount of time and be an important part of the team, but we'll get to the lineups a little bit later."

Outside of what Dyson brings to the team on the field, Cherington likes what adding a veteran presence does for his club as well.

"We tried to think about the influence on the environment that guys would have, particularly in a time of change which we're going through, that was important Shelty, important to me."

It's probably fair to wonder if the Pirates are still going to be looking extensively at the free agent market to improve the team, but Cherington has no such plans at the moment.

Click the audio link below to hear more from Cherington as he talks about the general thought behind the players he has signed in free agency this year, how they can improve the players they have here to make up some of the deficits last year team had and much more.