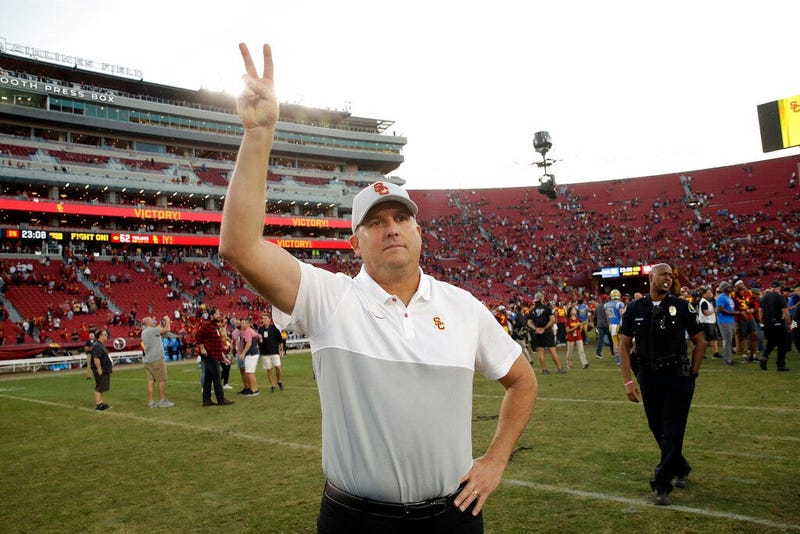 New athletic director Mike Bohn announced the decision four days after the No. 24 Trojans (8-4, 7-2 Pac-12) missed out on a trip to the conference title game when they finished one game behind No. 5 Utah in the Pac-12 South.

“His commitment to our student-athletes and to leading with integrity is vital to restoring our championship program, which is the goal for all of our teams," Bohn wrote on his Twitter account. “Heading into 2020, Coach Helton and I will work together to take a hard look at all aspects of the football enterprise and will make the tough decisions necessary to compete at a championship level.”

Helton’s current Trojans beat the Utes and won five of their final six games, but his 13-11 record over the past two seasons has instilled widespread dissatisfaction in many fans and deep-pocketed alumni around a program with perennial national championship ambitions.

Bohn, who was only hired Nov. 7, waited 11 days after the Trojans’ regular-season finale to officially stick with Helton, who has a lucrative contract through 2023.

The 47-year-old Helton is 40-21 at USC in his first head coaching job, which began with two interim stints before the longtime assistant coach got the permanent job on Nov. 30, 2015. Although his Trojans won the Rose Bowl in his first full season and the Pac-12 title in his second, the last two seasons have been less impressive — and they included the school’s first losing season since 2000 when they went 5-7 last year.

USC rebounded this season after hiring offensive coordinator Graham Harrell, finishing second in the division despite being forced to use three starting quarterbacks and playing the toughest schedule of any school west of Texas.

But Helton’s many detractors pointed to two seasons without national championship contention, an overall lack of buzz around the program and his staff’s perceived recruiting struggles as urgent reasons for change. Helton’s critics never fail to point out he went 20-17 with any starting quarterback other than Sam Darnold, including just 14-15 since he got the full-time job in late 2015.

Much of USC’s ever-ambitious fan base has been publicly calling for three-time national champion coach Urban Meyer, but it’s unclear whether Meyer is willing to end his retirement.

After his private deliberations, Bohn elected to stick with Helton, whose huge contract was handed out by former athletic director Lynn Swann, who left in September after new USC President Carol Folt took over.

The decision will do nothing to end Los Angeles sports’ most popular soap opera, which has been running ever since Steve Sarkisian’s firing for alcohol-related misbehavior cleared the way for the unlikely ascent of Helton, a longtime assistant coach who snagged one of the college game’s most visible jobs.

Helton’s potential firing has been almost a weekly topic of discussion around USC for the past 2 ½ years, ever since Darnold departed and the shine wore off Helton’s early success. The Trojans flopped mightily last season, losing five of their final six games to finish with only the school’s fourth losing record since 1961, but Swann kept Helton in charge despite many fans’ pleas for change.

Although Helton’s teams have performed well enough to satisfy many schools overall, the standards at USC are sky-high — and many fans could never see Helton as anything but a stopgap or a substitute teacher, among the many dismissive descriptions lobbed at the coach.

What’s more, the school’s recent renovation of the Coliseum cost a reported $315 million, and USC risks a decline in ticket sales and alumni interest without an injection of energy into a program that seemingly requires steady drama along with overwhelming success to thrive in Los Angeles’ crowded sports landscape.

Helton has remained upbeat and loyal to USC throughout the internecine drama around his future.

“I love this university,” Helton said last month after the Trojans wrapped up their regular season by routing crosstown rival UCLA 52-35. “I love the people of this university. I love how good they’ve been to myself and my family, and especially the student athletes. It’s been going on for over a century. I’ve had a wonderful 10 years here, and I have a deep fondness for this university and the people that are inside of it.”

Helton has restored respectability and order to a program racked by chaos and misbehavior in the half-decade after the Trojans were hit with severe NCAA sanctions, providing adult leadership and keeping his players almost completely out of trouble.

But the folksy, fatherly coach with a Southern twang has never seemed an ideal fit with Hollywood’s favorite college football team, and he has simply never satisfied fans who want both championship contention and star charisma from their Trojans.

USC spent the entire 2010s mostly failing to reprise its 2000s success under Pete Carroll, who won two national titles and played for a third while lifting the school back to its most glamorous heights. Former Carroll assistants Lane Kiffin and Sarkisian were both fired after vainly attempting to recapture Carroll’s magic, while Ed Orgeron only got eight games as the interim coach before his dismissal led to much greater success at LSU.

Helton has hung on much longer than almost anyone expected when he got the job in bizarre circumstances.

Helton was brought to USC from Memphis by Kiffin to be his quarterbacks coach in 2010, and the career assistant stayed on staff through the tumult of 2013, which included Kiffin’s midseason firing. The year ended with Helton as the interim head coach for a Las Vegas Bowl victory when Orgeron abruptly left his post as interim head coach after Sarkisian was hired over him for the full-time job.

Sarkisian kept Helton on staff — and after Sarkisian was suspended and eventually fired in 2015, Helton took charge again and led USC to a South division title. He was handed the full-time job by departed athletic director Pat Haden in a decision that immediately rankled many Trojans, and his team promptly lost its two postseason games.

But Helton won 21 games in his first two full seasons in charge, highlighted by an epic 52-49 victory over Penn State in the Rose Bowl on Jan. 2, 2017. Helton’s detractors credited much of that success to Darnold, who had two outstanding seasons at USC before joining the New York Jets with the third overall pick in the 2018 draft.

The Trojans might have something special again in Kedon Slovis, who just produced one of the best seasons by a freshman quarterback in USC history after he took over in September when 2018 starter J.T. Daniels was hurt in the season opener. Helton, a longtime quarterbacks coach, identified Slovis as a top talent before many elite schools figured it out, and Slovis has made his USC coaches look smart.