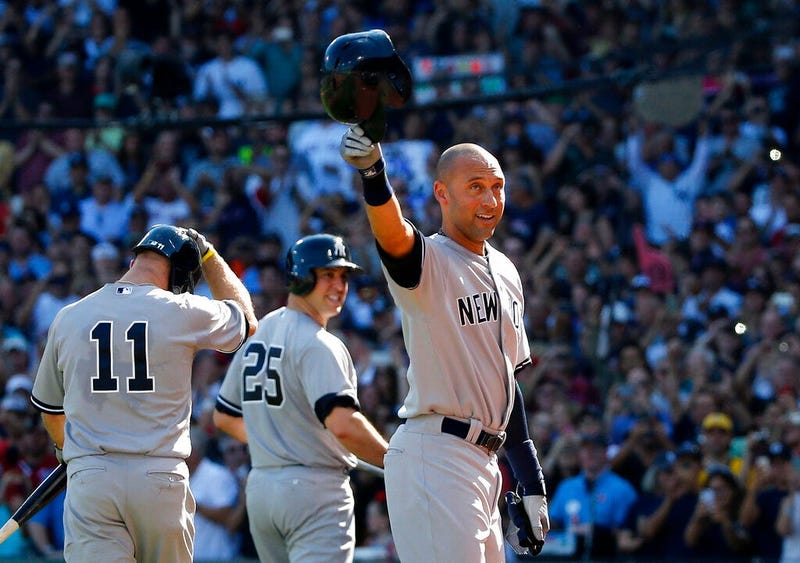 Mariano Rivera sailed into the Hall of Fame without a single dissenting vote. Next year, it's Derek Jeter's turn — and don't expect much opposition then, either.

Jeter headlines the group of candidates who will be newly eligible for the Hall next year , and now that Rivera has become the first player elected unanimously , it won't be a surprise if another transcendent New York Yankees star does the same. With 3,465 hits to his credit — not to mention five World Series titles — Jeter shouldn't have much to worry about when the results are announced.

Whether he goes in unanimously is another matter. After his longtime teammate broke ground as the first player selected on 100 percent of the ballots submitted, some baseball writers might be more willing to vote strategically: Nobody is allowed to pick more than 10 players, so for some it could make sense to leave off a certain inductee if a vote would mean more for a player on the bubble.

But nobody left off Rivera this time, and Jeter's stature in the sport is similar.

Here are a few other things to watch in the next Hall of Fame vote:

BEST OF THE REST

Jeter may be the only first-ballot Hall of Famer next year, but there are a handful of other new candidates who distinguished themselves as well. Cliff Lee won a Cy Young Award and Jason Giambi has an MVP. Alfonso Soriano accomplished a rare 40-40 season in 2006.

Edgar Martinez made the Hall this year in his last chance on the ballot. Fred McGriff did not. Next season, it's Larry Walker who will be up for the 10th and final time. Walker's vote percentage shot up this year from 34 to 55. He'll need another increase like that to get in.

Barry Bonds and Roger Clemens, their candidacies held back by links to performance-enhancing drug use, appear to have hit a wall. In their seventh year on the ballot, Clemens received 59.5 percent of the vote and Bonds received 59.1. Last year, Clemens was at 57.3 percent and Bonds was at 56.4.

In theory, there's enough time to make up the remaining ground — Martinez was below 50 percent three years ago — but views on Bonds and Clemens appear pretty entrenched.

Four players were elected this year by the Baseball Writers' Association of America, and with only Jeter standing out among the newcomers, the ballot might feel a bit less crowded next year. That could be good news for players like Walker, Curt Schilling (61 percent this year) and Omar Vizquel (43 percent). Walker has only one chance left, but Schilling and Vizquel have an opportunity to make progress in 2020 and then again in 2021, when the group of newcomers appears less formidable.

If you're looking for an under-the-radar candidate who looks pretty impressive through the lens of advanced stats, Bobby Abreu is eligible in 2020. Abreu was just a two-time All-Star, but he finished with a career on-base percentage of .395. According to Baseball-Reference.com, Abreu was worth 60 wins above replacement for his career — roughly the same as Vladimir Guerrero, who went into the Hall of Fame in 2018.