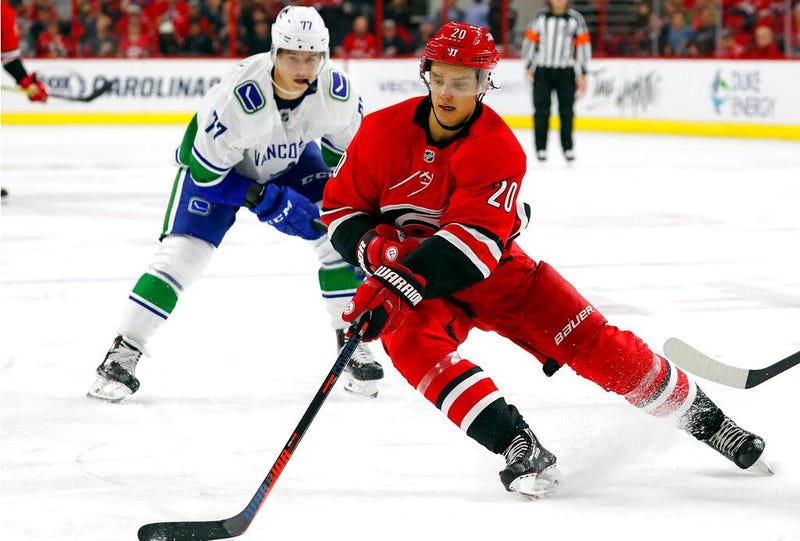 Photo credit (AP Photo/Karl B DeBlaker, File)
By 93.7 The Fan

(AP) Some of the NHL's best, young players are available.

Mitch Marner, Brayden Point and Jacob Trouba are just a few of the restricted free agents in a bumper crop.

Every team in the league would like to add any of those players this summer. However, it would be a big surprise in the NHL if any team tries to sign them away.

The Montreal Canadiens became the first franchise in six years to extend an offer sheet to a restricted free agent earlier this week, hoping the Carolina Hurricanes would pass on matching the $42 million, five-year deal for Sebastian Aho. Less than 24 hours later, Hurricanes general manager Don Waddell announced the franchise was going to keep its star forward .

Drafting and developing players is what NHL teams attempt to do well as they chase the Stanley Cup, certainly in the salary cap era. And, that is one of the reasons teams are reluctant to extend offer sheets to restricted free agents.

"The way the system is set up with offer sheets, it's too punitive because of the draft picks you have to give up," said sports agent Kurt Overhardt, who represents Trouba. "The record has shown it doesn't make sense for a lot of teams. Montreal took a chance, forcing a notoriously frugal owner to make a decision and he matched. But as long as you have the cap space, you have to match."

If Carolina chose not to match the offer for Aho, the Canadiens would have given up a draft pick in the first, second and third rounds. If Montreal offered a little more money on the offer sheet, it risked losing an additional first-round selection. And if the franchise offered Aho an average of at least $10,568,590 over the course of the contract, it would have lost four first-round picks if the Hurricanes refused to pay Aho that much.

Agents of restricted free agents attempt to use the possibility of offer sheets in negotiations. Teams, meanwhile, know offer sheets are extremely uncommon and they seem to have the power in talks. That is true particularly when players don't have arbitration rights.

"As an RFA you just want to be paid what you feel your value is and the offer sheet is one of a few points of leverage you can use," Winnipeg Jets center Andrew Copp said. "It's more important to have arbitration rights, but you only have so many options as a restricted player so it can be frustrating not being able to use one of your options."

Detroit Red Wings general manager Steve Yzerman said it's tough to predict if Montreal's move would be made by another team this summer.

"There's obviously several very high-profile, very good, young players out there," Yzerman said. "If this is a trend, I really don't know. I'm curious to see how it plays out."

As good as Marner, Point and Trouba are, they will likely end up being re-signed rather than extended an offer sheet.

The salary cap-squeezed Toronto Maple Leafs recently made moves to free up money to re-sign the 22-year-old Marner. The third-year center ranked fourth in the NHL with 68 assists and was just outside of the top 10 in the league with 94 points last season.

Tampa Bay does not appear to have a lot of money to spend, with stars Nikita Kucherov and Steven Stamkos counting $18 million per year against the salary cap, but it will want to find a way to keep the 23-year-old Point. The center had 92 points last season and has 198 in his three years in the NHL.

The New York Rangers acquired Trouba in a trade with Winnipeg even though they would have to sign the offensive-minded defenseman as a restricted free agent. The Rangers invested a lot in free agent Artemi Panarin , giving him $81.5 million over seven years this week, and don't seem worried about an offer sheet making negotiations more challenging with Trouba.

"Restricted is the emphasized word in restricted free agency," said agent Brian Bartlett, whose clients include restricted free agent Will Butcher, who had 74 points in two seasons as a New Jersey Devils defenseman. "The teams know it's unlikely and yet with Aho, it probably helped move negotiations along because you would assume Carolina didn't offer the same structure in its contract offer.

"There's always the opportunity for an offer sheet, but it has happened once every six years and the odds are against it happening more when you consider the thousands of players who have been restricted free agents."