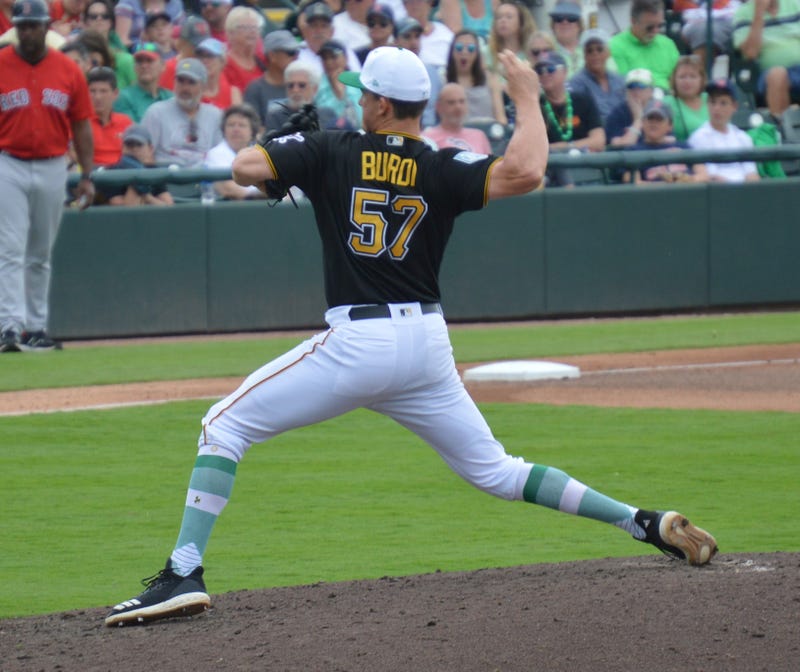 BRADENTON, FL (93.7 the Fan) – He once had the best fastball and slider in the Twins minor-league system, now Nick Burdi is trying to find a final spot in the Pirates bullpen.

The Rule 5 Draft pick-up from last year spent most of 2018 recovering from Tommy John surgery before being able to pitch in two Pirates games (1.1 innings) in September last year.  Because he got limited time in, Burdi would have to make the 25-man roster or be offered back to the Phillies, who traded the reliever to the Pirates for international slot money.

“Nick has come in focused and ready,” said manager Clint Hurdle.  “I think he left feeling really good about his health.  His health was clean.  He worked out for an extremely long period of time for only a short period to pitch.”

“It’s a little more on the table and fighting for our job,” Burdi said of this spring.  “Kind of every time you go out there you are battling for a position with six or seven other guys.  So it’s been exciting.”

The 225 pound Burdi is known for his workouts, but has learned that there is more to being a big-league pitcher than just hitting the weight room.

“I’ve always had that football mentality, but I have to take a deep breath and realize that the end goal is to be on the mound and not so much to put weight on,” Burdi said.  “I think it’s that happy medium where you push yourself in the weight room enough to keep that strength, but also be able to go out there and compete.”

Burdi is still strong, adding 20 pounds of muscle back from after his surgery while working out in a small gym in Rhode Island, where his wife is from.  He said he’s forced himself to be smarter and focus more on leg strength.  The 26-year-old feels less tension on his elbow and able to throw the slider again.  Something that was very hard to him to do at the end of last year.

While at Louisville, Burdi struck out 141 batters in 95 innings with 34 saves, in his final season, Burdi had a 0.49 ERA and was a Golden Spikes Award finalist.  This spring he’s hitting the upper 90s with his fastball and his numbers are also good.  He’s made eight appearances during Grapefruit League play and only scored on twice.  Each a single run while walking three and striking out 12.

“He’s come in, in a good spot,” Hurdle said.  “He’s been competing.  He’s been making pitches.  His velocity is playing.  His slider is coming to play a little bit.  He continues to give you things to think about.”

“If I stick with a team that is the end goal, but at the end of the day it’s being able to throw a baseball again and being able to play baseball,” Burdi said.  “If I can’t pitch, I don’t have a job anywhere.  The biggest thing is staying on the mound and staying healthy and just trying to compete where ever I’m at.”