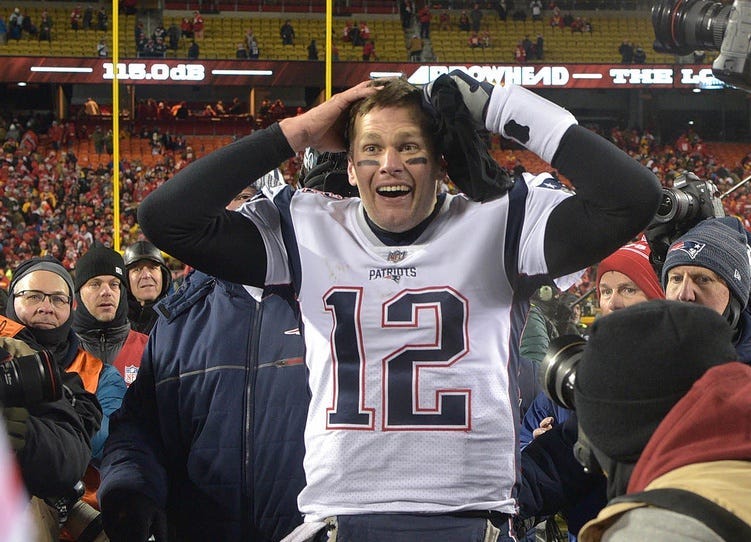 Tom Brady is a cheater.

Tom Brady is also the greatest quarterback who ever walked this vast Earth. And when I say ever, I mean ever.

Tom Brady benefited --- I don't know exactly how much --- by his organization being involved in Spygate. It helped his team complete passes, it helped them gain yards, it helped them score touchdowns and ultimately win games. That's my opinion and I'll never waver from it. Ever, ever, ever, ever. It is firmly what I believe.

Tom Brady also probably never needed it to beat teams; he would have been victorious anyway. He's like the smartest kid in the class who feels the need to have a surreptitious cheat sheet tucked up his sleeve or the answers written on the bottom of his shoe anyway.

It was all just reassurance, I guess. For me, as we sit here today and Brady is taking his team --- and his great talents --- to another Super Bowl, he remains the most perplexing and complex character in sports in my lifetime. Damn, is the guy great. But, damn, is he tough to root for. But, you know, damn is he great.

Watching what he did yesterday, there was never a doubt he was going to take his team up the field (he did it twice) and eventually be victorious. That's what Brady always does, that's how he built this legacy. When it comes time for the most consequential downs of a football game, Brady flourishes. And he did against the Chiefs, converting three 3rd-and-10s in the late-game situation all the while throwing dart after dart exactly where he wanted.

But there was also the other side of it, which makes Brady someone who is so complex to figure out: he was the beneficiary of a really, really iffy roughing the passer call and then had a huge blemish wiped away when an offside call negated what would have been a game-ending interception. It was just Brady being Brady --- seemingly always in the middle of everything and always coming out on the other side smelling like roses. He actually comes out smelling like 100 dozen roses, and with a huge smile on his face.

That, to me at least, is the mark of his career --- Tom Brady always is left standing at the end of the situation as the guy who is smiling and portrayed as the hero America needs, wants and has to have. I'm not complaining or saying it shouldn't be that way, I'm just observing the fact he incessantly seems to escape things and find the other side of it with the sunshine on him. It's just like the Spygate scandal now. In other sports, and maybe even with other football players, they'd be made to wear a Scarlet Letter forever. Not with Brady. It is ancient history, it's in the far, far past and he smiled his way through it. We, as the American football consumer, are supposed to forget about it. But, conversely as an American baseball consumer, we must never forget that Barry Bonds cheated. It just feels imbalanced to me.

On one hand, I think Brady can come off incredibly smug and arrogant. He can give the impression that he's a guy who looks at many people as if they are beneath him and has no soul, attachment to the common man or focus on anything but himself.

But then you hear the story like the one told in the aftermath of the AFC title game on Sunday. Apparently in the underbelly of Arrowhead Stadium, Brady left the Patriots' locker room and approached a security guard situated outside the Chiefs' locker room. Touchdown Tom wanted to talk to Pistol Patrick. Yep, that's right, Brady wanted to make sure to tell young Chiefs quarterback Patrick Mahomes to keep his chin up --- in Mahomes' time of deepest football despair, Brady wanted to offer a shoulder to lean on. That says a lot about Brady. or, at least the gesture, I don't know. Nonetheless, I know not every quarterback in the National Football League would have done something like that.

So you hear something like that and it adds even more to the "I can't figure this guy out" quotient.

I think that's where I am with all this. When his career is finally finished, when it is all said and done, I will have the understanding that Tom Brady was the best quarterback ever to do it. But I still will never be able to figure him out.