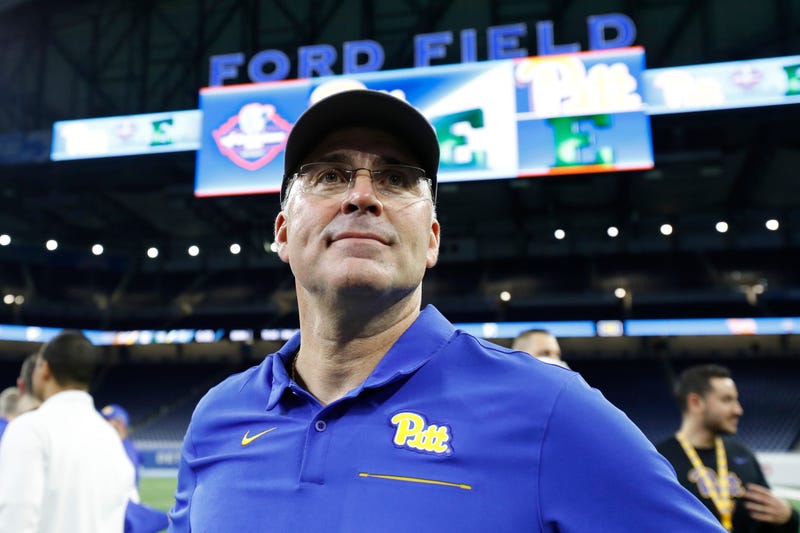 There is a current football head coaching opening in East Lansing, Michigan.

There is a National Signing Day event in Pittsburgh, Pennsylvania tonight.

The two are intertwined. They can't help but be. They have to be. It was always going to be this way when this day came.

I'll get to what has to happen at this Signing Day event in a minute. But first, the news ...

You see, Michigan State head coach --- guess he's former head coach now --- Mark Dantonio abruptly retired yesterday. He'd had enough for a variety of reasons. Some claim a lawsuit knocking loudly on his door had a lot to do with it; Dantonio says the stuff about the NCAA recruiting violations had nothing to do with it.

Believe what you want but the truth remains: The Michigan State job is open. They need a coach.

As it was always going to be, some in media have turned their eyes to Narduzzi, who led the Michigan State defense from 2007-2014.

At that time Sparty smacked you in the mouth.

They had four seasons of 11 or more wins.

They bruised and battered you.

They kicked your behind and left you reeling.

And Narduzzi was a big, big part of all of that.

Seems there are plenty of people who will try to woo Narduzzi back to wearing green by offering a bunch of green. Michigan State can pay --- and pay in a big way. There is zero doubt.

To me, Cincinnati coach Luke Fickell should be the No. 1 guy on the Michigan State radar. He fits the bill and, in my eyes, has the potential to be a better leader of a big-time program than Narduzzi and many around this country. That's no knock on Narduzzi, instead it speaks to how good Fickell is.

Still, though, there are rumblings. There will be rumblings and there might even be a little fire where there is undoubtedly smoke with this "will-Narduzzi-go-to-Michigan State" stuff.

That's where this whole National Signing Day event comes back into play.

It's scheduled for 5 p.m. tonight at Heinz Field. Narduzzi is slated to be there.

Being there is one thing, but he needs to go a step farther. He needs to --- if it's true --- boldly and clearly proclaim his allegiance to Pitt if he has no interest in going to Michigan State.

He needs to stand in front of that crowd and say "I'm not going anywhere; Hail To Pitt" or something of the sort. I mean, provided that's all true.

We know that words said by college football and basketball coaches generally don't mean much, but words they don't say ring even more loudly.

Pat Narduzzi has a chance tonight to put an emphatic end to anything involving his name and Michigan State.

He has a platform and microphone.

He will have a captive audience.

If he wants to truly stay at Pitt he needs to just come out and clearly say it.