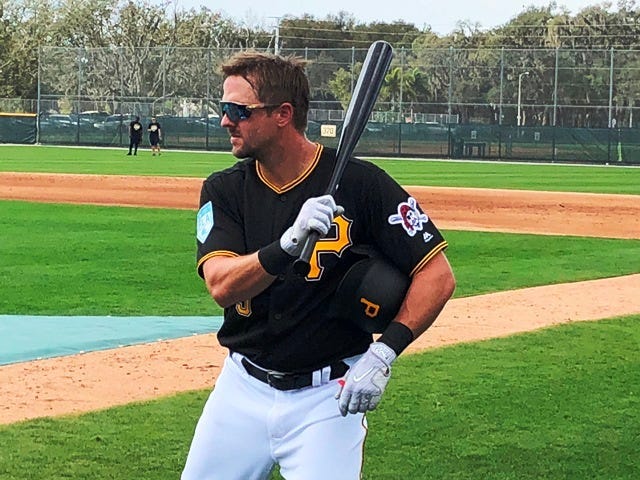 Bradenton, FL (93.7 The Fan) - Lonnie Chisenhall's track record is that of a productive major league hitter--when healthy.  Therein lies the problem.  The 30-year-old outfielder was limited to 111 games over the past two seasons (29 in 2018) in Cleveland with multiple calf injuries.

As Chisenhall goes through his first spring training as a Pirate, he knows the deal.

"My main goal this year is to be the field," Chisenhall said. "I've taken a lot of steps, a lot of my day is spent taking care of my body, especially the lower half.  We'll monitor playing time and see how I'm feeling.  I've felt great so far.  Getting my legs under me the first two, three days is kind of tough (because) you're on your feet so much.  Nothing can prepare you for being on the baseball field in cleats and things like that.  I'm looking forward to this year.  I plan on being on the field."

Ironically, the Pirates interest in Chisenhall as a free agent, at least in part, stemmed from Gregory Polanco's shoulder injury that's expected to sideline him through at least the first quarter of the season. The late addition of outfielder Melky Cabrera, a teammate of Chisenhall's in 2018, will give manager Clint Hurdle options in right field in the early going.

"We were aggressive in bringing Lonnie in early, so we're going to look to him first," Hurdle said.  "It's an opportunity for him to be the first man out there.  We'll see how it plays out."

Even when out of the lineup, Chisenhall grew accustomed to winning in Cleveland.  The Indians have posted six consecutive winning seasons and went to the post-season the past three years, including the World Series in 2016.  Now, he's part of a team that hasn't played meaningful games in October since 2015.

"You know it's a similar makeup to what I came from," Chisenhall said.  "The pitching staff's a strength, the bullpen's a strength.  A lot of young, hungry players in the clubhouse, a lot of guys who are already proven.  The people are in here to get it done.  It will be fun."

So will an injury-free season, for a change.