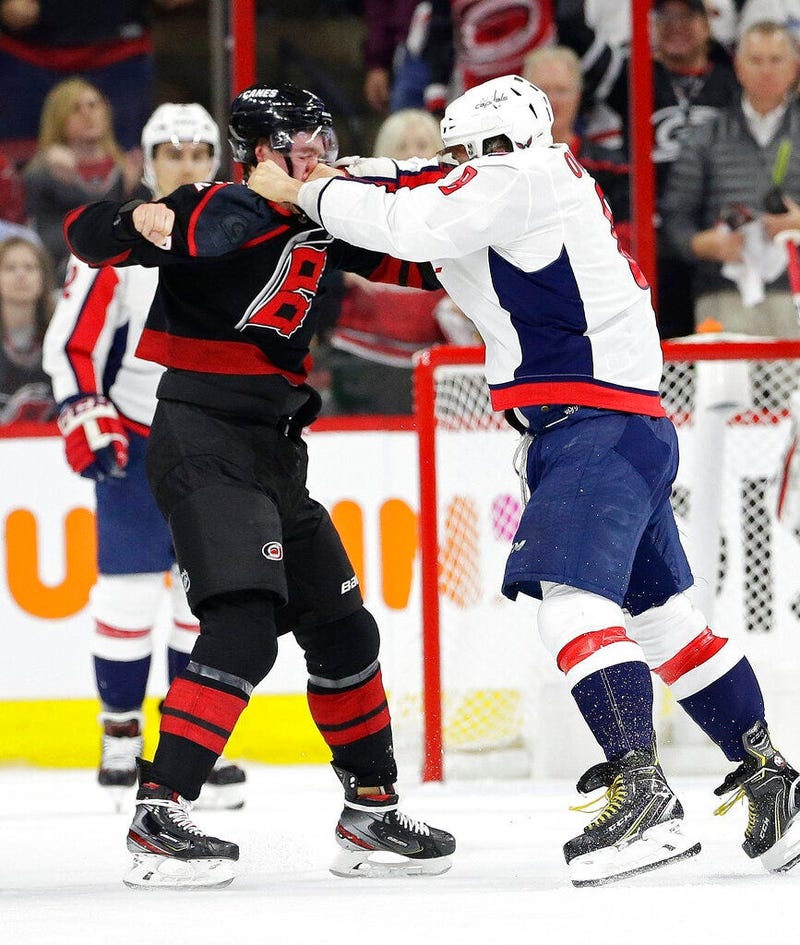 RALEIGH, N.C. (AP) — A barrage of punches from Washington Capitals star Alex Ovechkin could have an ongoing impact on the reigning Stanley Cup champions' playoff series against the Carolina Hurricanes.

Ovechkin floored Carolina rookie Andrei Svechnikov with a right hook during a fight in the first period of Monday night's 5-0 loss to the Hurricanes in Game 3 of their first-round series. It was a rare fight for Ovechkin, one that knocked the 19-year-old Svechnikov from the game when he banged his helmet on the ice as he fell backward.

Svechnikov, who had two goals in his playoff debut last week, was helped to the locker room and didn't return. That left his status unclear for Thursday's Game 4 and beyond with the Capitals up 2-1 in the best-of-seven series.

It was Ovechkin's fourth career fight and first since 2010, according to HockeyFights.com. It was his first in the playoffs, while Svechnikov had not been in a fight all season.

Carolina coach Rod Brind'Amour didn't have an update on his status. The team said only that Svechnikov had an upper-body injury.

"How do you comment on it? It's a little bit tough because I just heard Ovie talk about it: he said our guy challenged him," Brind'Amour said. "If that's the case, it's a little different.

"But if you watch the video, because I got to watch it, he slashes him twice, Ovie — whack, whack — and then Svech gives it back. And then, I don't know if there's words exchanged, but one guy's gloves come off way first. And that's Ovie, it's not our guy."

It was less than a year ago that Svechnikov got the chance to meet a player he had long looked up to before the Capitals closed their Cup run and before Svechnikov was the No. 2 overall pick in the draft.

"It's just an honor to have met with him," Svechnikov said then of meeting Ovechkin.

This time, things weren't quite so friendly.

The two Russians fought with 9:01 left in the first period. Ovechkin — with a 40-pound weight advantage — locked a firm hold on Svechnikov's collar while throwing a steady bombardment of punches.

He eventually landed one squarely in the center of Svechnikov's face. And as the rookie started falling backward, Ovechkin kept his hold and delivered a final blow toward Svechnikov's forehead as they fell.

As Ovechkin skated to the penalty box for a 5-minute fighting penalty, Svechnikov was flat on his back, dazed and struggling to sit up as teammates Jordan Staal and Kevin Faulk skated to him.

Svechnikov eventually was able to stand but was wobbly as he was helped off the ice.

Brind'Amour said he was "still sick to my stomach about it."

"It's a little bit frustrating, because he got hurt, it's his first fight," Brind'Amour said. "He's played 90 games, he never fought in his life, I'm pretty sure Ovie knew that.

"So that stuff bothers me, because that's...," Brind'Amour said, his voice trailing off, "but it's done."