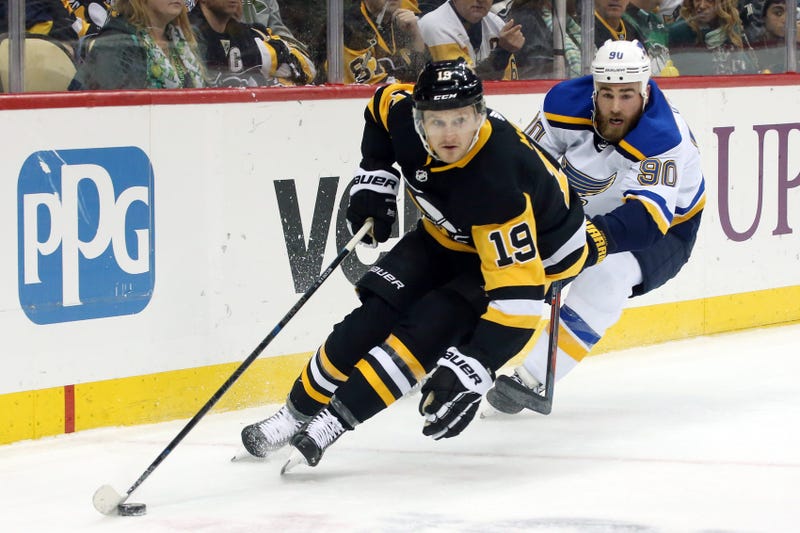 PITTSBURGH (93.7 The Fan)- In 32 games as a Pittsburgh Penguin, 22-year old Jared McCann has scored 11 goals and 17 points while playing mostly alongside a generational talent in Sidney Crosby and a 40-goal scorer in Jake Guentzel on the Pens' top line.

McCann joined The Fan Morning Show on Monday ahead of the Penguins first round match-up against the Islanders to talk about his season and the playoffs.

"It gives you a level of confidence that they're (Crosby and Guentzel) going to make that extra play and whether it's defensively or offensively, they always make the right play and I'm just trying to help them out."

It will be the first playoffs experience for McCann in his young career and needless to say, he's fired up for it.

"I definitely feel like it's going to be a different atmosphere, for sure," said McCann. "I think they're in the Coliseum and obviously it's a loud barn and this is my first time in the playoffs so I'm excited for it but I do have a lot of jitters."

"I think this is just a whole new animal. Going off what the guys said in the dressing room and stuff like that, I think it's a different type of game. It's obviously faster and we have to be ready for it."

Despite the Islanders' defensive style, McCann doesn't expect much to change from the Penguins' side of things in this series.

"They have a great team and have done really well this year but we're not going to try to get away from what we've done all year or since I've been here or anything like that. I feel like we've just got to keep it simple and we're going to have to learn from how they play us and try to beat them."

McCann talked about the change of scenery coming to Pittsburgh from Florida and how the organization and the fans have treated him.

"Coming here you walk into the room and they've got photos of everybody on the walls, not just a couple guys. They've got everybody up there," said McCann. "It comes to show that this a team that focuses on that team mentality. I feel like everybody is so welcome here, no matter if you're a first line guy or a fourth line guy or an extra D-man. I feel like I've just been so welcomed here, both me and Nick (Bjugstad) and we're grateful for the opportunity."

"I put a lot of expectations on myself, I hold myself to high standards. I've been nothing but welcomed by the fans here which is awesome. I'm really thankful for it, it's been great and I'm just trying not to let anybody down."

McCann is also from Stratford, Ontario, the same hometown as pop star Justin Bieber. He hasn't met him personally but said they do share some mutual friends and if the Penguins win it, he'll extend an invite to Bieber to his Stanley Cup party.