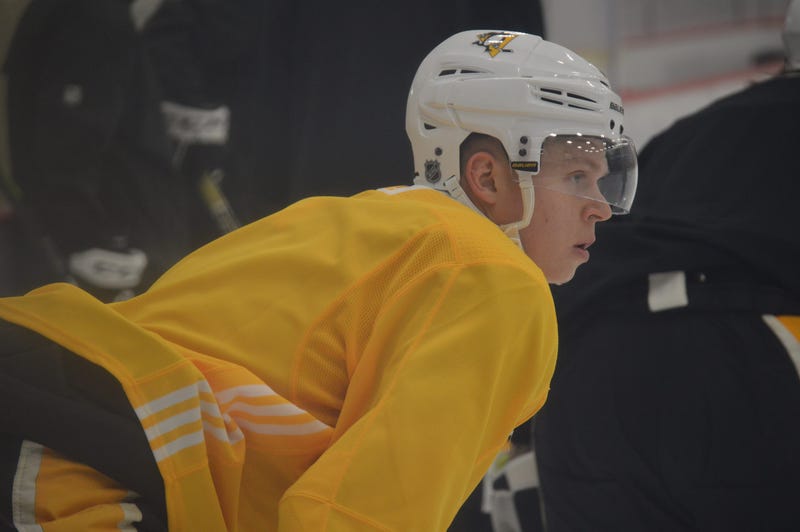 CRANBERRY TWP, PA (93.7 the Fan) – Improving health is never a bad thing, but it can present challenges, as Pens head coach Mike Sullivan decides who’s in and who’s out for the opening night of the Stanley Cup playoffs Wednesday on Long Island.

Defenseman Brian Dumoulin practiced full for a second straight day on Tuesday as did forward Zach Aston-Reese.  Each labeled as game-time decisions.

“We’ve discussed it at length as a coaching staff,” Sullivan said.  “Obviously they are difficult decisions when we have a healthy group of defensemen.”

“All of those guys have done a great job in helping us win games down the stretch.  It’s a good challenge to have.  We will communicate as best we can as we always try to do, but everyone has to stay ready, because we will need everybody.”

What we know for sure is that when he’s ruled back, owning one of the best plus-minus ratings in the game, and with offensive career-highs, Dumoulin will play.

“Huge, he’s a big part of this team,” defenseman Justin Schultz said of Dumoulin’s impact.  “He’s so solid defensively and contributes offensively too.  He’s a great skater.  Obviously, we are a much better team with him in our lineup.”

Olli Maatta seems to be the wild card here.  The 24 year-old has won a couple of Stanley Cups, but has only played in five games since his return from an undisclosed injury causing Maatta to miss a month and a half.

During that time the Pens traded for defenseman Erik Gudbranson, and Marcus Pettersson seemed to gain traction after coming over from Anaheim in early December.  And the two have worked fairly well together.

“I think we’ve done a good job,” Maatta said of dealing with injuries.  “Whoever comes in has been able to fill-in really well.  Nobody has to change their game here, just play your own game.  We have a lot of confidence that whoever is out there is going to bring their best.”

Gudbranson also brings a toughness that no one else on this team’s roster has.  The 27 year-old understands the numbers game as well.

“It’s a good thing,” Gudbranson said of getting players back.  “It’s timely too.  We had almost our whole back-end out there (at practice Tuesday).  Having that depth going into the post-season is huge because you never know what can happen.  Being healthy is a huge plus.”

“Great.  Great, feel good about it,” defenseman Jack Johnson said of their depth.  “You’ll get on a long playoff run, we’re hoping everybody stays healthy, knock on wood, but more often than not things happen and you have to have some depth.”

“I know it’s nice, everyone is getting healthy now around the right time of the year,” Schultz said.  “Hopefully it stays like that.  We have guys around here who can step-up, if they have too.”