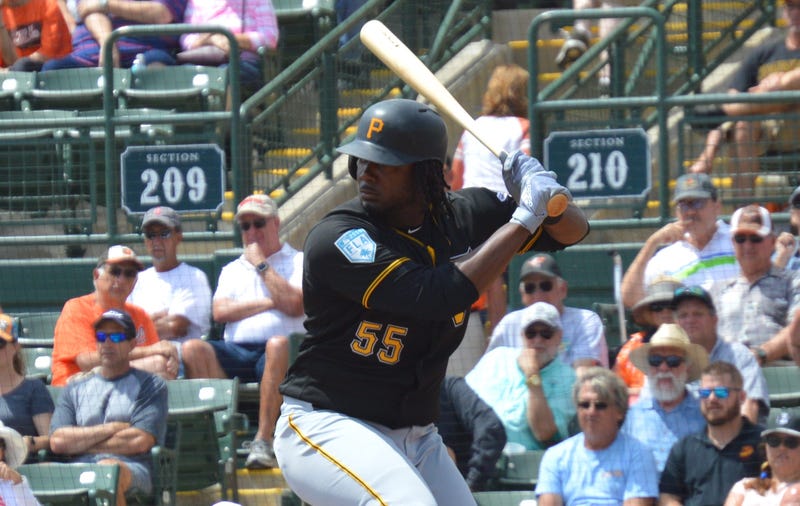 SARASOTA, FL (93.7 the Fan) – While manager Clint Hurdle said on Sunday he’s still working on final roster decisions and has not made a decision on a 5th starter, there is one area he feels good about--his lineup.  And while he may mix-and-match a little, we know Josh Bell will hit fourth.

“Absolutely he’s in the cleanup spot still,” Hurdle said.  “I like the way it lines up.  There’s analytics involved, there’s a really good eye test as well.  You got some power, you got some speed, you got some on base.”

The most steady lineup is Adam Frazier leading off with Starling Marte second, followed by Corey Dickerson, Bell, Jung-Ho Kang, Francisco Cervelli, Lonnie Chisenhall and Erik Gonzalez.  Kang has hit second with Marte missing a few games with back tightness and Gregory Polanco will factor in after a month or so.

“I think it’s the best lineup for us against right-handed pitching, there may be a tweak against left-handed pitching,” Hurdle said.  “It’s strong from top to bottom and I think we can score runs and do anything offensively from anywhere in that lineup.”

Hurdle said it’s often that those outside of the club think of their best players being their leaders, namely their top four starters, however the Bucs manager said many on this team lead.

“They all have fun personalities, game personalities,” Hurdle said of his group.  “They mix and match well.  Those four starters are all unique in their own right.  Each one of them has an individual characteristic that sharpens the others in the clubhouse.”

“One of the interesting characteristics of this club is the overall development of so many guys coming through our player development system and growing up together which adds a different edge to it,” Hurdle said.  “That’s why a guy like Adam Frazier has confidence to take a role.  Josh Bell has confidence to take a role.  Then you have external people involved like Cervelli, who has been here a while.  Who can provide some leadership there.  Marte has talked about his next steps along those lines.  Dickerson has been very intentional about sharing as well.”

“There are a whole bunch of guys in there and no one feels like they gotta be the guy, which I think is a redeeming quality for this club.”

With the exception of some bumps and bruises, it was a clean camp for the Pirates and after packing trucks full of equipment and a month and a half worth of personal items, the Pirates head north in good spirits with still a pair of exhibition games in Houston before opening in Cincinnati.