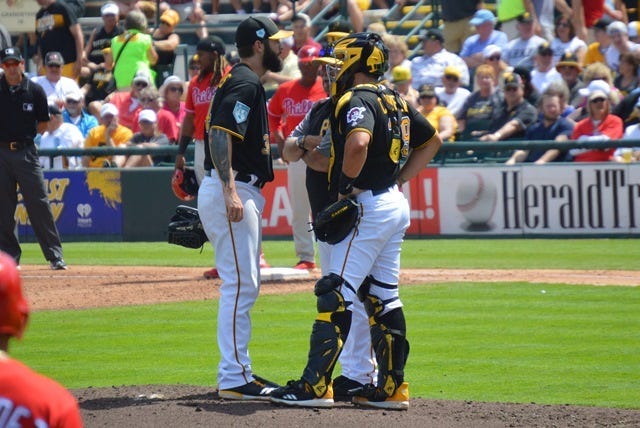 BRADENTON, FL (93.7 the Fan) – Major League Baseball and the MLB Players Association announced rule changes for this year and next.

Starting this season, there will only be one trade deadline, on July 31st.  Visits to the pitching mound will be reduced from 6 to 5.  Inning breaks will be reduced by five seconds in local broadcasts and 25 seconds in national broadcasts.  All will be two minutes.  All-Star Game fan voting will change with bonuses to the top vote-getters at each position and the winner of the Home-Run Derby will get one million dollars.

Next season, the rosters will expand by a player, September rosters will be limited to 28 players instead of 40 and pitchers must face either a minimum of three batters in an inning or until the end of a half inning.

“To negotiate and come to together on it, I think it shows good will on both sides,” Pirates union representative Jameson Taillon said.  “Even though things have been a little tense, we still both care about the state of the game.”

The league tabled the idea of a pitch clock.

“As a player, I think it’s great,” Taillon said.  “I’ve had to really close teammates get traded at the end of August the past couple of years, Juan Nicasio and David Freese.  The more your name is being circulated around, the more uncomfortable it is.  If you are not going to get traded (in July), guys want to finish out the year with their team.  I think one trade deadline should help put players a little more at ease, once you make it passed that, you know you are finishing out the year.”

Both Williams and Taillon said they didn’t notice this much when it changed to six visits last season.

“One thing for us is going to be changing signs,” Taillon said of an adjustment needed.  “We need to have a way to do that in-between innings.  We need to be proactive about it.  We need to have something we can switch while we are going so we can eliminate extra mound visits.”

Roster in September to 28

Both Taillon and other players were a little unclear how it will work yet, however Taillon believes it’s just another way to keep the game going.

“(Cubs manager) Joe Maddon had a walk-out song in September for his walk-out visits.  They are playing matchups and it makes a 3-2 game turn into four hours.  I don’t think that’s good for baseball.  It’s something that’s less about service time and more about making sure you set your roster.”

“I think it’s a great move,” Taillon said.  “I think it helps with the way bullpens are being used.  I’ve seen a lot of teammates over the years ride that shuttle back and forth from Triple A.  I think every organization can say there is a guy from Triple A that deserves to be in the big leagues, who is just catching the short end of the stick.  So, just as a human, I like the element that someone might have a job locked down and not have to go up and down five times a year.”

“I don’t know how I feel about this one,” Taillon said.  “It’s going to be interesting.  If you are a major league pitcher I’d like to think you can get both sides out, but there are also some guys who have made a great career of being a lefty specialist and coming in and getting the meat and potatoes of the order and being able to go through those middle of the lineup bats.”

“You don’t want to take away from the strategy of the game where playing matchups is a part of our game, but at the same time this move is made to speed up the game a little bit.  We’re talkin’ about a couple of guys who this could affect.  We will see how it goes, but I think players will be watching that one pretty closely.”

Taillon quipped that most of the Pirates are quick now that reliever Antonio Bastardo is no longer with the team.

“I get asked a lot about the pitch clock and they say part of what they love about baseball is that it’s not on a clock,” Taillon said.  “I understand speeding up the game is the right move, and we need to be proactive about it.  Putting a clock over our shoulder is not the best thing to do.”

“It’s brought to our awareness for sure and we understand that if we are not moving quick, they do have the right to implement it at any time.  We need to enforce that on our own and if we don’t, they’ve shown they will step in.”

“I thought it was a non-issue,” said starter Trevor Williams.  “If you ask everyone around the league, it is a non-issue.  I understand we are trying to speed up games, but at the end of the day, there may be two or three outliers that took their time.  Other than that, everyone worked fast and everyone knows what they need to do to not slow the game down.”