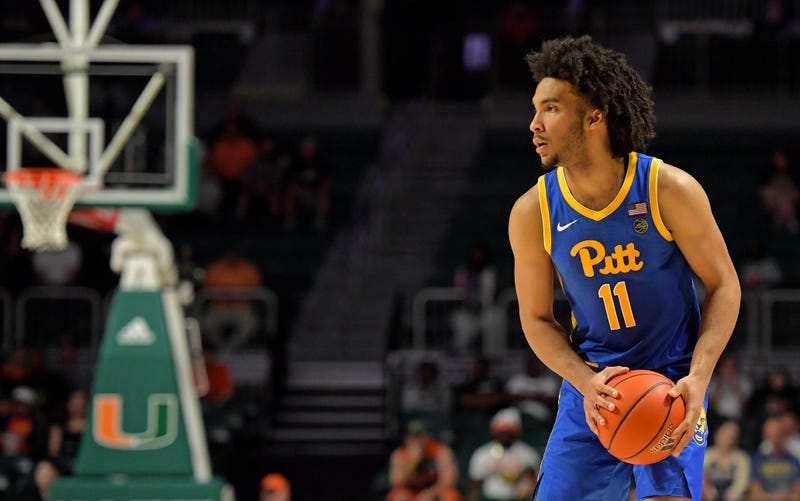 Justin Champagnie believes he can identify why Pitt has struggled on the road this season. And he hopes that the Panthers can find a way to break it Wednesday night.

To this point, the Panthers are 2-4 on the road, with just one road win in ACC play.

“We got through ups and down as a team,” said Champagnie, who is averaging 14.3 points per game in Pitt’s last four road games. “We’re young still. If we just stick together and stay poised on the road, we’ll have a good outcome.

“It’s hard, but it’s a mindset to me. Don’t every splinter away from your team. Keep everybody together. It’s easy stuff, just always being one and not letting anyone drift off or go into their own mind.”

Pitt lost consecutive road games last week, at Syracuse and Duke. But the Panthers regrouped Sunday to take down Miami, 62-57, at the Petersen Events Center.

But Notre Dame is an interesting challenge for the Panthers. The Irish lead the nation in assist-to-turnover ratio and commit just 9.7 turnovers per game, the best mark in the NCAA.

“Our point of emphasis is defense,” Champagnie said. “We live off defense. If we just pressure them, just crowd them up, they’ll eventually start turning the ball over. It’s on us to make them do that.”

Notre Dame an also shoot it, leading the ACC in three-pointers per game. Discipline is key, too. The Irish commit the fewest amount of fouls per game in the country.

That’s the good with the Irish, 11-3 at home this year. But defense has been in question. Notre Dame is 11th out of the ACC’s 15 teams in scoring defense and allowed 80 points to Wake Forest, 85 to Florida State and 84 to Syracuse in the last two weeks.

But the Irish have won two straight, beating Wake Forest and Georgia Tech and scoring 170 points in those two victories.

And when shots don’t fall, Notre Dame arguably has the nation’s best rebounder, John Mooney, cleaning up underneath.

“He’s an energy kind of player,” Champagnie said of Mooney, a 6-foot-9 senior. “He grabs the boards, does all the dirty work. In order for us to win, we have to take him out of his groove, try to limit his rebounds, try to limit his touches on the ball. And just put a lot of pressure on him.

“Keeping him off the glass is the main thing. That’s his main point of emphasis on the court. We’ve got to box him out and key up on him when he gets in the post. If we just put a body on him, just pressure, he’ll cough the ball up.”

Hear more from Justin Champagnie below.