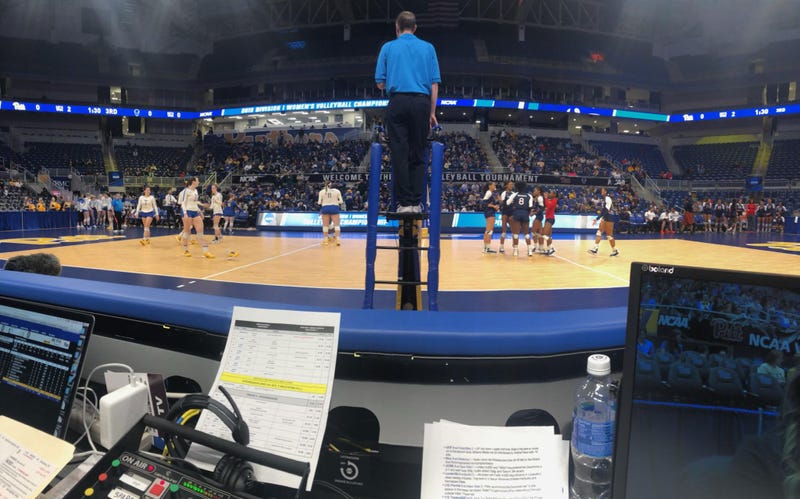 PITTSBURGH (93.7 The Fan) - Pitt's season comes to an end as the Cincinnati Bearcats upset the Panthers in five sets, 3-2, in the 2nd round of the NCAA Tournament.

The #6-Overall seed Pittsburgh Panthers faced off against the Cincinnati Bearcats in the 2nd round of the 2019 NCAA Volleyball Tournament at Petersen Events Center Saturday Night.

It was a back and forth first set of the match as every time Pitt would take a multiple point lead, Cincinnati would battle back and take a lead of their own and vice versa.  After a service error for set point by Pitt that tied the set back up a 24, the Panthers scored the next two points to win the set 26-24 to take a 1-0 lead in the match.

Cincinnati jumped out to an 11-8 lead to start the second set, but Pitt was able to rally and tie it at 11 and just like the first set it went back and forth. The Bearcats, however, were able to put together a late run to win the set 25-21 and tie the match at 1.

Pitt rebounded in the third set as they took the early lead and never looked back as they won the set 25-16 and took a 2-1 lead in the match.

It was a slow start for the Panthers in the fourth set as Cincinnati jumped out to a big league early. Pitt slowly clawed their way back into the set, but the Bearcats were able to hold on to win the set 25-21 and tie the match at 2.

A decisive fifth set would be needed in this second round matchup.

Pitt jumped out to an early lead in the fifth set, but Cincinnati rallied to keep it close as the Panthers had an 13-12 lead late.  The Bearcats, however, were able to come up with the next three points to win the set 15-13 and the match 3-2.

Leaders for Pitt tonight were Lexis Akeo with 58 assists, Kayla Lund with 20 kills, Hali Hillegas with 18 digs and Chinaza Ndee with a .324 hitting percentage.

Cincinnati moves on to face Penn State in the Third Round of the NCAA Tournament.