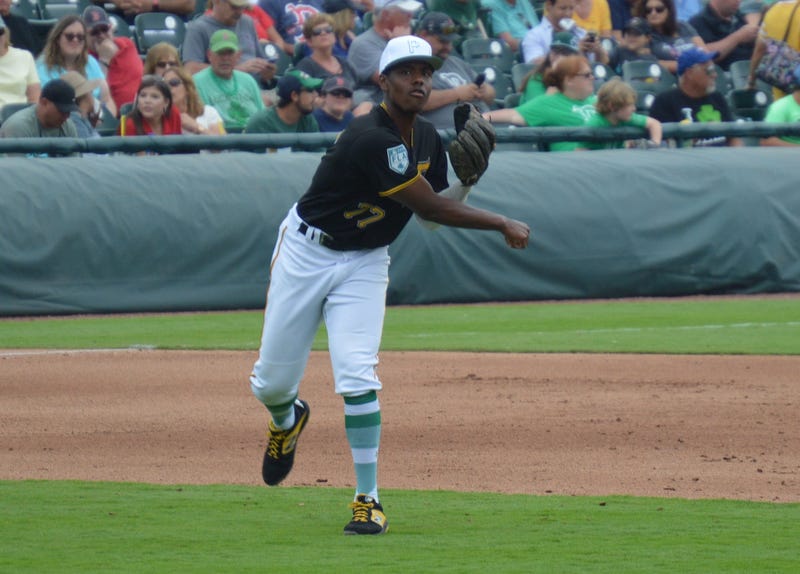 BRADENTON, FL (93.7 the Fan) – It was an eye-opening 17 Grapefruit League games for 2015 Bucs number one pick Ke’Bryan Hayes.  The third baseman hit .348 with a pair of homers, drove in nine runs and looked major-league ready on defense.  It’s now time for Hayes to refine his game at AAA Indianapolis.

“Happy that I was able to be here, it was a humbling experience for me,” Hayes said.  “Glad I got to watch a bunch of our major league club and just see how they interact in the clubhouse.  How they prepare for a game and things of that nature.”

“We got an intelligent young man who wants to be a great baseball player,” said GM Neal Huntington.  “He has defensive skills, but there is refinement that he can continue to get better.  The speed of the game is going to be better at AAA.”

“Skilled.  Reserved, yet he is a very good student of the game,” said manager Clint Hurdle.  “Ears and eyes were in tuned.  To watch the glove and the feet work together, it was very fun to watch.  There is all kind of arm to play there and then he will show he has more arm.  He’s got a defensive skill set that is real and unique.”

Huntington said there are areas of improvement needed for Hayes and hence the decision to start the year in the minors.  However both he and Hurdle saw a lot of growth after a solid season in Altoona, where he hit .293 with seven homers and was named the Pirates Minor League Player of the Year.

“I feel I definitely can do it,” Hayes said.  “It’s probably better for me to go to AAA first and get that seasoning in to face those types of pitchers because they are going to throw different things at me.  It’s definitely good for me to go there first.”

Hayes was a Pirates representative in the Futures Game during All-Star week in Washington D.C. and he believes he is close.  The Texas native says he needs to work on hitting off-speed pitches better and generally improving in all areas.

The 22 year-old enjoyed his month with the major leaguers, saying his father, former Pirate Charlie Hayes, told him to try and have as much fun as possible.

“Being able to be on a field with a bunch of major leaguers pretty much every day made me feel like I belong there and that I can do it.”

Hayes is part of a group that Huntington called the most talented team he’s had at AAA.  Given Hayes has never played back-to-back years at the same level, he likely won’t be in Indianapolis long.