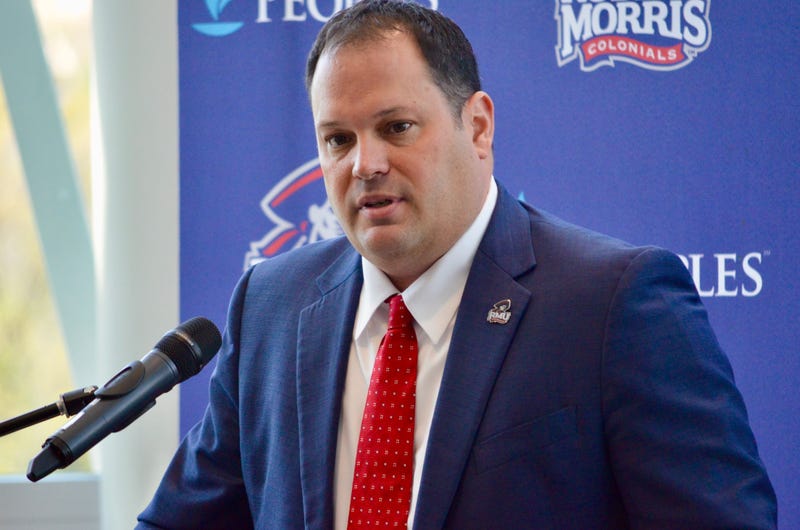 The Apollo, PA native and 1994 Robert Morris graduate was introduced Tuesday as the Vice President and Director of Athletics of his alma mater.

“Chris is coming back to Robert Morris to take the Colonials to the next level, to build our culture of winning,” said Robert Morris President Chris Howard.

“It’s out student athletes who will benefit the most from Chris King’s leadership. Above all else, Chris prizes the student-athlete experience.”

“I never would have thought, in a million years, that 25 years later I’d be standing before you as the Vice President of that University that means so much to me.

King, who replaces Craig Coleman, has a background is in compliance at UCF and Alabama. Now he looks to continue Robert Morris’ goal to become an athletic fixture in Western Pennsylvania.

“Robert Morris is at a much different level now, athletically, than what they were when I was here, and even 5-8 years ago,” he said. “Competitive success has really been elevated in the last several years. So I’m very excited about that.”

King has an aggressive, 100-day plan to begin his time at Robert Morris. Mainly, he wants to get to know the community and those involved in athletics, before formulating an enhanced marketing plan for the Colonials.

RMU has had success on the athletic playing surfaces in the 2018-2019 school year. Women’s basketball, men’s golf and men’s lacrosse all qualified for the NCAA Tournament, marking the first time in school history that three programs have received automatic bids.

The men’s basketball team is coming off an 18-17 season in which it was selected to the CIT Postseason Tournament. The football team, however, has gone 2-7 each of the previous three years, including the 2018 season under first-year head coach Bernard Clark.

“Our goal is to win in the classroom, to win in the playing field and courts and to win in this community,” King said. “I believe in that. Our student athletes, whether it’s five, ten or 15 years down the road, if they don’t feel that they’ve had a world-class experience here at Robert Morris, then I’ve failed them as an athletic director.”

Hear all of Chris King’s introductory press conference below.