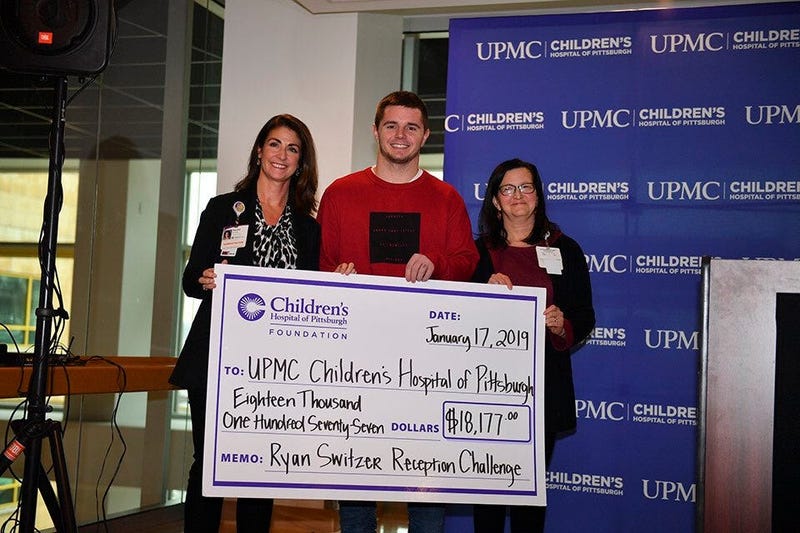 It was a great day at Children’s! Today, @Switz, wide receiver of the @steelers presented a donation of over $18,000 for his fundraising reception challenge based on his game catches, with all donations directed to cancer care here. We can’t thank him enough for his support! pic.twitter.com/mTTDZH0ORO

After going back and forth on Twitter, Dunlap offered an olive branch said he would donate $20 a catch to a charity of Switzer's choice.

Switz responded by saying he would donate $40 for every catch and would give all of the money collected to the oncology programs at Children’s.

On Thursday, Switzer donated the money that was raised.

“It’s really wonderful how a simple disagreement, which could have spiraled into Twitter nonsense, ended up being resolved by two level-headed people. And it’s such a bonus so much money was raised. I think it’s a great lesson that, even though social media, people can communicate better and resolve things kindly,” said Dunlap.

Dunlap knows all too well how important the work Children’s does is to the community.

His 7-year-old daughter Darran was diagnosed with Leukemia in 2016 and will complete the long treatment process this spring.

When cancer affects a child it is devastating to a family but like with Darran’s and many other children affected by pediatric cancer, it is also amazing to witness how strong and determined children truly are.

If you’d like to contribute to help brave Children continue the fight, you can donate here.