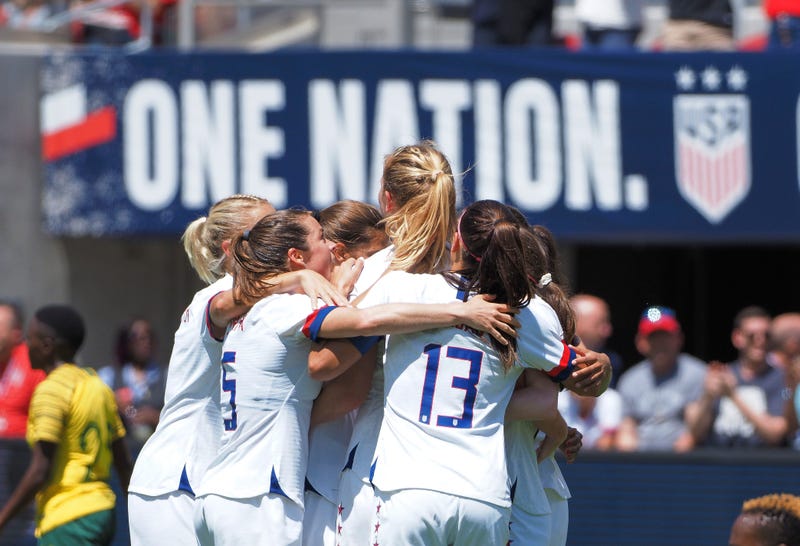 After missing most of 2018 with a knee injury, Mewis is finding her stride at the right time as she gets ready for her first career appearance in the World Cup. She scored last month against Belgium and followed that up against South Africa with her second career two-goal game.

Carli Lloyd added her 108th career goal in second-half added time to the delight of the crowd of 22,788 at the home of the NFL’s San Francisco 49ers. That moved Lloyd into fourth place in career goals for the U.S., breaking a tie with Michelle Akers.

The Americans controlled the play from the start, with the game played almost entirely in South Africa’s end. But despite dominating possession, the U.S. generated few prime scoring chances early because several crosses and final passes just missed their targets inside the box.

Mewis had one of the best chances when her header off a cross from Tobin Heath sailed just over the crossbar. But Mewis made the most of her next opportunity in the 37th minute when she took a pass from Rose Lavelle near the top of the box. Mewis faked to her left, came back to the right and beat goalie Andile Dlamini with a shot from outside the box that went just inside the post

The Americans kept up the pressure in the second half and finally added a second goalie after Dlamini left with an injury and was replaced by Kaylin Swart. Megan Rapinoe started the play with a quick restart after a foul and eventually sent a cross into the box. Swart deflected the pass but it went right off Mewis and into the net to make it 2-0 in the 78th minute. Mewis other two-goal game for the national team came in a friendly against South Korea in 2017.

This match is the first of three tuneups in the World Cup send-off series for the Americans, followed by a game Thursday against New Zealand in St. Louis and May 26 against Mexico in New Jersey.

The tournament starts June 7, and the U.S. pays its first match four days later against Thailand. The Americans will also play Chile and Sweden in the opening round.

The U.S. had its full roster in place and started close to the expected lineup in France with the exception of Lindsey Horan and Rapinoe, who came in as a second-half substitute. The game against the 49th ranked South Africans, who will make their first Women’s World Cup appearance next month, didn’t provide the stiffest test.

U.S. goalie Alyssa Naeher got little work with most of the action at the other end of the field but earned her second straight shutout and 23rd overall.

South Africa, which has another tuneup June 2 in France against Norway, plays its first World Cup match June 8 against Spain and will also play China and Germany in group play

NOTES: U.S. M Julie Ertz got a bloody lip in the first half and returned to the field with gauze to control the bleeding. ... South African D Noko Matlou was taken off on a stretcher in the second half. ... South African Mamello Makhabane was pulled from the starting lineup after she got injured at practice on Saturday. Kholosa Biyana started in her place.