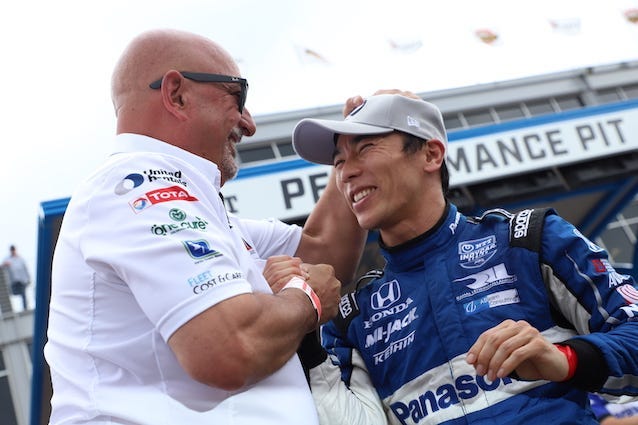 Leeds, AL (93.7 The Fan) – Rahal Letterman Lanigan Racing's Takuma Sato is on the pole position for today’s Honda IndyCar Grand Prix of Alabama at Barber Motorsports Park and his teammate Graham Rahal starts right beside on the front row.

“This is a dream result,” said Sato.  “We don’t really care which (teammate) is first; obviously I do care that I am in front of Graham, but this team is working so hard and sometimes a lucky break comes, but today we did everything together.”

The front row lockout for RLL is the team’s first since Chicagoland in 2005 and is another highlight in a season of highlights for the organization so far this year.

RLL opened the season in grand style, winning the GTLM division of the Rolex 24-Hours of Daytona.

“It really couldn’t have been any better, winning the 24-Hours of Daytona in our category with the new BMW M8,” Bobby Rahal told me in a recent interview.  “Chip Ganassi’s Ford was leading but they had to make a pit stop and we had it worked out we could make it to the end so that was very satisfying for us.  That’s such a long race, a grueling race and the second half was basically run in the rain so to win in the end, our fuel strategy worked great.”

The team’s newest entity, The Jaguar I-PACE eTROPHY team, has won 2 of the 4-events run this season and in both of those wins the team finished 1-2 and each driver, Bryan Sellers and Katherine Legge, scored victories.

The team has a tradition of flying the checkered flag outside the team’s Hilliard, Ohio headquarters whenever they win a race.

“We have 2-wins and 3-seconds so you can’t start out any better than that, I keep telling the IndyCar guys ‘okay it’s your turn’” Rahal joked.

The IndyCar side of RLL made a number of off-track, organizational changes dating back to last year and there have been flashes of improvement like leading the morning warm-up at St. Petersburg, Graham Rahal’s fifth place finish in the last race at Circuit of the Americas in Austin, Texas but nothing like what happened on Saturday at Barber.

The off-track changes included the addition of race and Championship-winning engineer Allen McDonald.  McDonald joined the team in October of 2018 and is working work with Graham Rahal as his race engineer this season.

“I’ve tried to hire Allen on several occasions and never quite got it right,” said Rahal.  “Obviously he’s had tremendous success in IndyCar racing.  He’s won the 500 a number of times with Dan Wheldon, Dario Franchitti and others.  Last year he won the pole position with Ed Carpenter and they finished second in the race. I think Allan brings to the team a good history of obviously a lot of good set-ups and thought processes of how he goes about things.”

The addition of McDonald allows Tom German to focus solely on his role as technical director.

“I think we’re really starting to see the fruits of our labor,” said driver Graham Rahal.  “It’s been good to kind of evolve, to bring on Allen, to get Tom into his new role as Technical Director.”

Another key addition has been Piers Phillips, the former General Manager of Schmidt, Petersen Motorsports, who has joined the organization as team President.  Phillips will oversee all of the teams racing programs.

“He’s able to focus on the team 100% of the time, which I really in the end was unable to do given all my other interests and what have you,” said Bobby Rahal.  “So, we have made a lot of changes, I think good ones, and hopefully it’s the start of a number of good years to come”.

Continuity in the cockpit and behind the pit wall and on the timing stand is key to any organization.

“Continuity is a great thing,” said Graham Rahal.  “We both know where we want to be, where our cars are, where we’re a little bit different and you kind of just have to know that and accept that and work towards your ultimate goals.  Through the off-season we really kind of worked on separate paths in order to build-up our tool box so to speak.  We know where our strengths are and our weaknesses are and things like that, so that’s really a positive for us.”

The IndyCar Series is gaining all kinds of momentum in 2019 because of a number of off-track deals like racing this year at Circuit of the Americas, a new TV deal and a new series sponsor.

“Being on one network I think is a plus,” said Bobby Rahal. “New sponsor with NTT with the series which is 4-years in duration right now.  Big rumor is a third engine manufacturer is going to be announced here in the next couple of weeks so it’s those things that really give you a lot of confidence that the series is going to continue to grow and attract new fans, bring back old fans, we see it in the tv ratings, we see it in the attendance figures, so I don’t think we’ve ever been in as good a spot as we are right now as a series.”

Rahal credits IndyCar leadership with the series health because he has been through the good and the bad days of open wheel racing.

“Everybody talks about the heyday of CART, ‘those days as good as they were’, I don’t think they are close to where it is today in the management of IndyCar racing,” Bobby Rahal stressed.  “Mark Miles as the CEO and Jay Frye who comes with years of experience in NASCAR as a team owner, operations guy, marketing guy, the two have really raised the level of the performance of the series.  There’s tremendous faith and confidence in the leadership of the series.”

The leadership and strength of the IndyCar Series has enabled RLL to bring a number of new sponsors to the series.

“I think we’ve brought somewhere close to 10-new sponsors into the IndyCar Series, some of which are long-term like Total the French oil company who has been with us now for a number of years, United Rentals and Fifth Third Bank,” said Bobby Rahal.  “I think IndyCar Racing for the cost, compared to say NASCAR, is a better buy and I think that’s why we’re seeing IndyCar is pretty attractive to companies.”

RLL is pretty attractive to companies as they now race in various series all over the world, similar to competitors like Roger Penske, Andretti Autosport and Ganassi.

“I think that is part of the reason why we pursued the Jaguar program was to have that international footprint,” said Bobby Rahal. “If we go to talk to a company that has interests internationally as well as domestically we have something that we can say, ‘here we can do this, this, this and this,’ and I think it give us a little bit of an advantage that we can attract companies with those international aspiration that otherwise would not be interested.”

Hanging a few more checkered flags outside the team’s shop never hurts either.