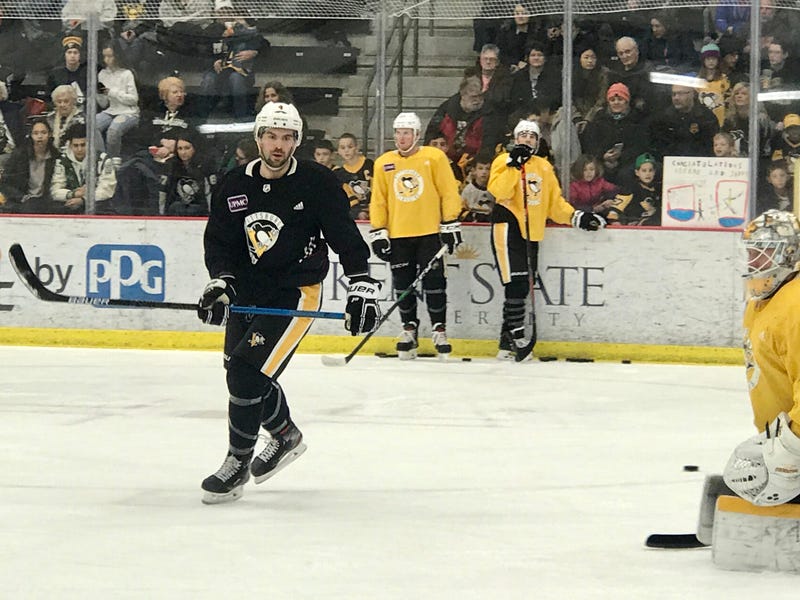 In the midst of a run of impressive play, the Penguins may soon be adding another weapon to the mix.

Defenseman Justin Schultz participated in practice Monday, wearing a normal jersey for the duration of the work.

“Pretty close,” Schultz said about when he can be expected back. “Obviously I was in a full-contact (jersey) today. So hopefully I can get in as quick as I can.”

As for the Penguins’ Tuesday night matchup in Philadelphia?

“I’m not ruling it out, but not confirming that,” he said. “We’ll see how I feel tomorrow.”

“We’ll make decisions accordingly,” Pens coach Mike Sullivan said. “But it’s no so much what we need to see from him, it’s a matter of a conversation with Justin and the medical staff and what we think is best for him and the team.“

Schultz has been out since December 17 with a lower-body injury. Pittsburgh has gone 12-3-1 in his absence.

“Everyone that’s been here has done a great job of stepping up. We’ve had some pretty big injuries. (Sidney Crosby), (Nick Bjugstad) and (Brian Dumoulin), those aren’t easy guys to replace.”

“Everyone is playing as a team, working hard. It’s tough to play against.”

Before going out with the injury, Schultz has scored two goals and assisted six more through 27 games played. Three of his points came on the power play.

The return of a presence like that to a team that has won six of seven games could be significant.

“It’s huge,” defenseman Kris Letang said. “We’re finally starting to get healthy. Guys are coming back in the lineup. It’s fun to watch.”

One deterrent from Schultz returning Tuesday could be what lies ahead of that game. The Penguins will have a nine-day layoff before their next game. So extra time could be a benefit, too.

“Our guys, their return to play is based on what the medical staff think is best for the player, first and foremost, and then the team as a whole.”

Hear more from Mike Sullivan and Justin Schultz below.