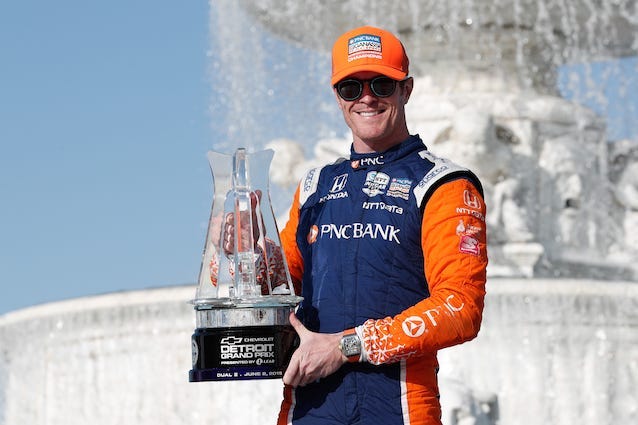 DETROIT (93.7 The Fan) - PNC Bank Chip Ganassi Racing’s Scott Dixon picked up his first win of the season on Sunday by winning race 2 of the NTT IndyCar Series Chevrolet Detroit Grand Prix, commonly referred to as the "Dual in Detroit".

Dixon beat Arrow Schmidt Petersen Motorsports Marcus Ericsson to the finish line on the 14-turn, 2.35-mile temporary street course on the Raceway at Belle Isle Park by 1.9419-seconds.  Team Penske’s Will Power finished third to round out the podium.

Dixon’s win was quite the rebound after the 5-time champion made an uncharacteristic mistake on Saturday in race 1 when he clipped the wall and finished last.

“Today was all about redemption,” said Dixon.  “It was a tough day yesterday.  I can’t thank the PNC Bank crew enough.  The team nailed the strategy, the car was super-fast.  I can’t believe we ended up here today and it’s just fantastic. Fantastic.”

Dixon’s day started off with quite an honor.  Queen Elizabeth II appointed Dixon the Companion of the New Zealand Order of Merit in recognition of his services to motorsports.  The honor cam as part of the Queen’s Birthday Honours List recognizing achievements of extraordinary people across the United Kingdom.  Dixon’s native New Zealand is part of the British Commonwealth.

“It was definitely a huge honor to get the Companion Merit of Order, which is definitely very prestigious, something you don’t expect,” said Dixon.  “I think it’s not like a normal accolade, like a trophy or a race win. It’s something of a very different feeling, so for me it’s definitely been outstanding.  Very proud to get that.”

Ericsson was proud to get the first podium finish of his rookie NTT IndyCar Series season after five seasons in Formula One.

“It was amazing, my first podium since 2013 and you just have to thank the whole team at Arrow SPM,” said Ericsson.  “They work so hard all year and we had so much bad luck, and I’ve done mistakes when we’ve been looking really good.  So, to finally get a result like this and be on the podium, I think is a great reward for all the hard work.”

Power was thrilled to recover after suffering gearbox damage during a five-car incident on lap 1 and stalling his car on lap 5.

“I definitely thought we were done,” said Power.  “I couldn’t shift and then, obviously, I tried to reset it and then I stalled. But just a great recovery.  I couldn’t believe it.  It was an amazing day.”

“It was great to have a victory here,” said Newgarden, who crashed out of Sunday’s race in a three-car incident on Lap 33.  “I can’t blame anyone.  It’s my fault.  I picked up too much marbles on the inside, and (that lane) was too slick and as soon as I tried to turn, I just lost the rear.”

NOTES: Pittsburgh Steelers head coach Mike Tomlin spent the day in the Ganassi pits and timing stand as a guest of PNC Bank and the team owner.