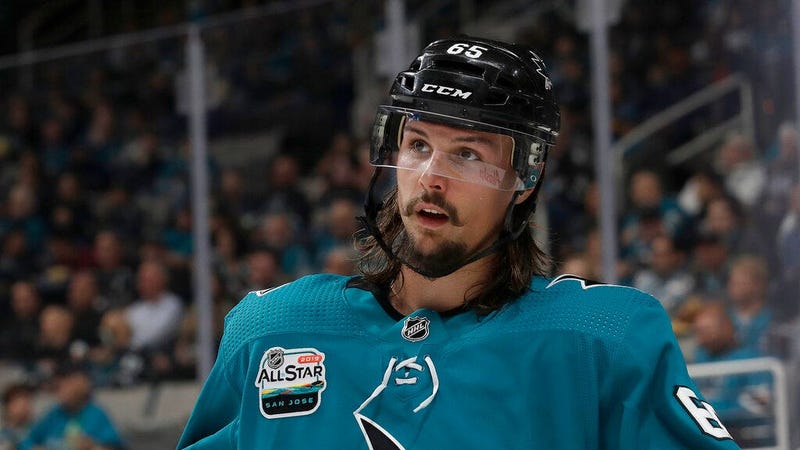 SAN JOSE, Calif. (AP) — The San Jose Sharks re-signed pending free agent Erik Karlsson to a $92 million, eight-year deal on Monday, turning a one-year rental into a long-term commitment to one of the league's most dynamic defensemen.

Karlsson was eligible to become an unrestricted free agent on July 1 but decided to stay in San Jose, where he will try to win his first championship and the first for a franchise that has reached the conference final five times in the past 15 years without ever winning it all.

"I'm excited to continue the chase for the ultimate prize: the Stanley Cup," Karlsson said in a statement. "Last year was an unbelievable run but we didn't achieve what we set out to do. But the dedication I witnessed from my teammates, coaches, staff and organization showed me that we all have a great future ahead of us, and that we are capable of fighting for that championship year in and year out."

A person with knowledge of the deal confirms that it carries an annual cap hit of $11.5 million and includes a full no-movement clause. The person spoke to The Associated Press on condition of anonymity because the team did not announce terms of the contract.

The Sharks acquired the two-time Norris Trophy winner just before the start of last season from Ottawa as a one-year rental. Karlsson was hampered by groin injuries for much of his first season in San Jose but also showed flashes as he helped the Sharks reach the Western Conference final, where they lost to eventual champion St. Louis in six games.

"Players with Erik's elite level of talent are rare and when they become available, it's important to be aggressive in pursuing them," general manager Doug Wilson said. "He is a difference maker who consistently makes the players around him better. We are pleased that he has been proactive in addressing his injury from last season and are looking forward to him being part of our organization for a long time to come."

Karlsson wore down at the end of the series against the Blues. He missed most of the second half of the third period in a Game 4 loss to St. Louis, missed the entire third period when the Sharks lost the following game and then didn't travel for the Game 6 loss that ended San Jose's season. The 29-year-old Karlsson had surgery on the groin on May 31 and is expected to recover fully before the start of next season.

The Sharks were confident enough in his health to give him the richest contract of any defenseman, topping the $88 million, eight-year extension Drew Doughty signed in Los Angeles last summer. The only current deals worth more annually are Connor McDavid's $12.5 million cap hit on an eight-year deal in Edmonton and Auston Matthews' $11.6 million cap hit on a five-year contract in Toronto.

Karlsson got off to a slow start in San Jose following the trade and then was slowed by the groin injury that sidelined him for 27 of the final 33 regular-season games. He finished his first season with the Sharks with three goals and 42 assists in 53 games.

But during a stretch from December to January, Karlsson showed he still has the ability to be the best defenseman in the NHL. He had points in 15 straight games that he played and had 25 points total in that span.

Karlsson got hurt Jan. 16 in Arizona. He returned to take part in All-Star weekend in San Jose but had to wait two more weeks to play a real game. He got hurt again Feb. 26 in Boston and didn't play again until the regular-season finale.

While Karlsson still wasn't at full speed when he returned, he managed to make a major impact in the playoffs. He had 14 assists in 19 games and scored two goals, including the overtime winner in Game 3 against the Blues.

Karlsson will be part of an elite, yet expensive, defense group for the long term in San Jose, alongside 2017 Norris Trophy winner Brent Burns and shut-down defenseman Marc-Edouard Vlasic. All three are now under contract at least through the 2024-25 season and an annual cap hit of $26.5 million.

The Sharks also have Brenden Dillon and Justin Braun under contract for one more year but could look to deal one of them to create more cap room for other free agents.

San Jose still has two high-profile pending unrestricted free agents to try to sign. Captain Joe Pavelski is set to hit the market after scoring 39 goals this season. Franchise icon Joe Thornton also is a free agent but hasn't announced whether he plans to retire or try to come back to San Jose for another season at age 40.

The Sharks will have to send their second-round pick in 2021 to Ottawa because they kept Karlsson. San Jose previously traded a 2019 second-round pick; a 2020 first-rounder; forwards Chris Tierney, Josh Norris and Rudolfs Balcers; and defenseman Dylan DeMelo to the Senators for Karlsson.