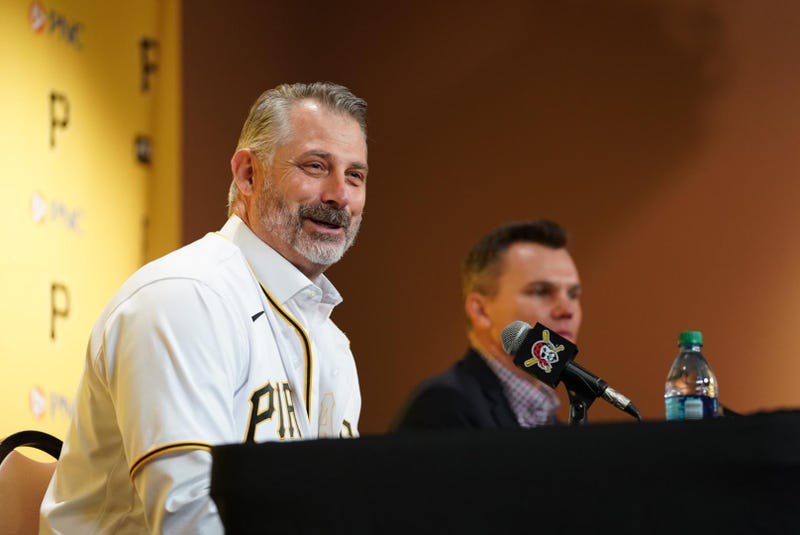 Photo credit @Pirates on Twitter
By The Fan Morning Show 93.7 The Fan

December 5, 2019 12/05/2019 3:50 pm
PITTSBURGH (93.7 The Fan)- New Pirates manager Derek Shelton was officially introduced Wednesday at PNC Park and then took the time to join The Fan Morning Show Thursday morning to continue the conversation about his new role.

Shelton said right away that things aren't going to look the same with him as as the manager of the club.

"The first thing is, not being there last year, it's very hard for me to comment on what actually happened just because I wasn't there and it's all secondhand. Secondly, I think it goes with the culture you create. I've been very open in everything I've talked about, about the fact that we're going to adjust the culture and change the culture.

There's going to be a new way of doing things. It's going to be very much built around building relationships, not only for myself but for my coaching staff. So, I think that's kind of the first step."

One of the words that was mentioned as part of the problem last season is "accountability". Shelton talked about what that means for him and how he is going to establish more of it.

"I think everything starts with the manager accountability-wise. One of the ways I think that I will manage the club, it will not be just sitting in my office. I'll be around and I'm out and I like to talk to people and I like to be around people. I'll be on the field, I'll be in the clubhouse at times.

To my first point, I think the manager is the person that is ultimately accountable for anything that happens. Then you talk to different players and you build relationships and you kind of figure out who the people in your clubhouse are that can handle things. Some of those people may be players, some may be coaches. Our guys will be held accountable. It will be accountability that starts with me."

Shelton was also asked about Starling Marte's public comments to a Spanish-speaking outlet essentially saying that he wants to win, whether it's in Pittsburgh or not. So how will that first conversation go between Shelton and Marte?

"It's going to be an introduction just like everybody else. The fact that he wants to win and made a public comment about that doesn't change it. I think we all want to win. I think we want players that want to win. It's a situation where he made a comment that's very true. He feels like he wants to win. So, it doesn't change the conversation between us."