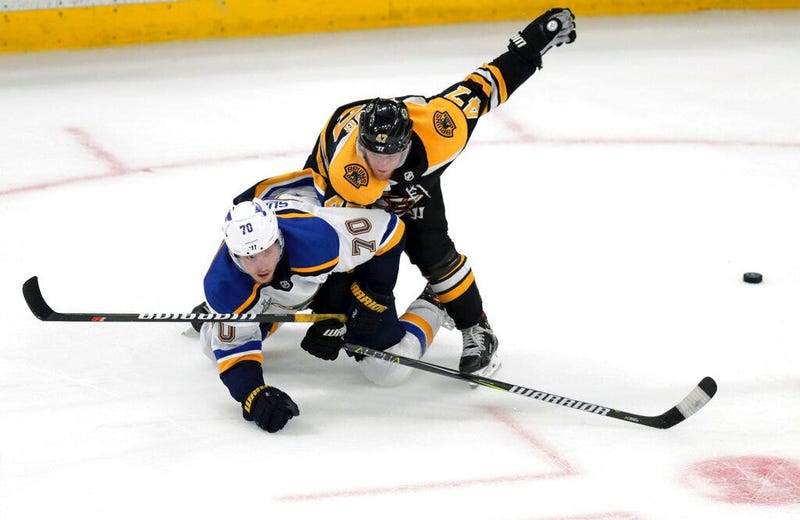 Something is missing from the Boston power play.

The uninterrupted puck movement and cross-ice passes to a wide open David Pastrnak aren't there anymore. Torey Krug isn't getting the chance to fire away from the top. Patrice Bergeron isn't dominating between the faceoff circles like before.

Boston opened a 2-1 lead in the Stanley Cup Final helped in a big way by their lethal power play. Since then, the St. Louis Blues has shut out the most effective power play unit since the 1980s New York Islanders and shut down the Bruins' best players, too. The Blues power play has been nothing special, but their penalty kill is a major reason why St. Louis has won two straight to take a 3-2 lead with a chance to claim the first NHL championship in franchise history at home Sunday night.

St. Louis has gone from being the playoffs' least-penalized team through three rounds to something else entirely. The Blues are borderline undisciplined, relying on targeted toughness to beat up the Bruins. It's working. Since allowing six power-play goals early in the final and 4-for-4 on four shots in Game 3, the Blues have made five successful penalty kills to neutralize Boston's most valuable weapon.

"We're staying tight to each other," Blues penalty killer Oskar Sundqvist said. "We're not letting them pass through the seams and shoot from the top and things like that. We're making it harder on them and keeping them on the outside. We just need to keep doing the same thing and we're probably going to be fine if we do that."

Not just fine. If this keeps up, they could be Stanley Cup champions.

Game 3 was such an eye-opener of how good Boston's power play is that many wondered if the Bruins were just going to steamroll the Blues and win the series in five games. But Sundqvist was suspended that game andgoaltender Jordan Binnington has shown serious resolve since then. Blues coach Craig Berube has also made adjustments to Boston coach Bruce Cassidy's special teams.

The Bruins power play had been converting over 30% — a clip that could've been the second-highest all-time for a Cup champion — and was drawing comparisons to the Islanders' early-'80s dynasty that featured Mike Bossy, Denis Potvin, Clark Gillies and Bryan Trottier.

"Back then it was more drop-off, backdoor, overload ... a lot more point shots," Cassidy said. "Little more low-to-high driven net-on-net, whereas now I think you see a lot more power plays, certainly always the half wall is a big thing. But I would guess more net-front tips, rebounds back then. Now it's more one-timer, seam passes."

Krug considers Cassidy a power-play mastermind, and that will be tested in preparations for Game 6 in St. Louis with the Bruins facing elimination for the first time since Game 7 of the first round against Toronto.

Getting the power play on track is key to staving off elimination. And it's not just about scoring because the power play fuels the Bruins' 5-on-5 offense, and even that's not happening right now..

The frustration is seeping through.

"Any time you don't get chances on the power play, you're going to get frustrated," Blues captain Alex Pietrangelo said. "So we're just doing our job."

St. Louis has done a much better job at maintaining defensive assignments on the penalty kill after inexplicably leaving skill players wide open in Game 3. Seemingly dumbfounded by Boston's power play that night, the Blues have begun to turn the tide on faceoffs on special teams and figured out how create their own penalty-killing momentum.

Closing down the Bruins power play has compensated for a series-long parade to the penalty box by the Blues. If it continues, St. Louis could soon be hosting its first professional sports championship parade since baseball's Cardinals won the World Series in 2011.