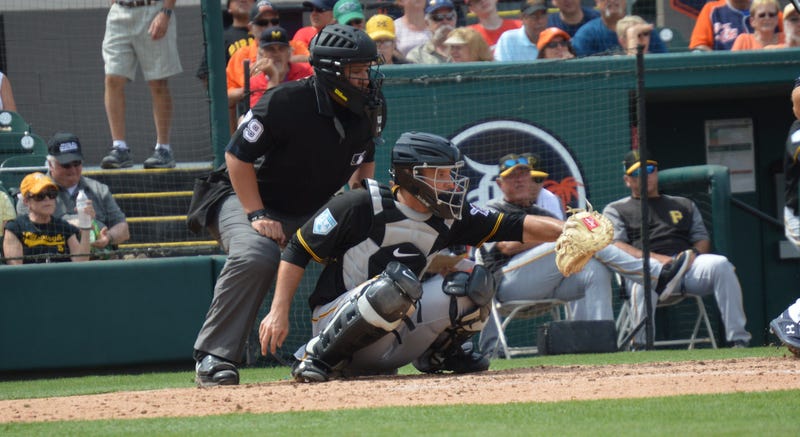 BRADENTON, FL (93.7 the Fan) – Either way, Jacob Stallings knew something would have to give this Spring Training.  The 29 year-old catcher was either going to be on the major league roster or potentially face life with a new team.

Stallings was out of minor-league options, but will make this team as last year’s backup, Elias Diaz, has not yet caught in a game due to missing several weeks of camp after contracting a virus.

“It’s kind of in the back of your mind more than in the forefront,” Stallings said of a roster decision coming.  “It doesn’t change the way I go about my work every day.  But when I go home, you kind of let your mind wander and ‘what are they thinking’, ‘what might happen’?   You play all of the scenarios in your head.  I would say it affects me more that way than at the ballpark.”

Stallings believes he’s improved in game-planning and sequencing and really trusting himself.  He says you have to be able to filter out the information you can’t use.  He’s also now comfortable with all of the pitchers on the roster.

“They guys that have been here for the past year or years; those are some of my best friends in the world,” Stalllings said.  “I love catching them.  The relationship is key for pitchers and catchers and it’s something I enjoy.”

"He's our third guy, but when we throw to him it's been like we've been throwing to him his whole life," said starter Trevor Williams.  "That's a testament to his preparation and the relationship he has with players on the team."

“Diaz has poured into him,” Hurdle said.  “Cervelli has poured into him.  The three have worked very good together, there were so many times last year he came up and didn’t play, but he was around.  He absolutely used those opportunities in a very positive fashion and very time he left it was to go get better.  He was not bitter.  He used every day in the big leagues to learn something that he is putting into application right now.”

"The experience is going to give him more positive results," Cervelli said.  "This guy put a lot of effort into this work and he's been really good."

The team’s seventh round pick in 2012, the righty hitter has a career.288 batting average in the majors with 10 RBI in 24 games.  And while he’s excited for this opportunity, he also wants his friend to be ready to go.

“Obviously, I want him to get healthy,” Stallings said.  “It’s kind of a weird, conflicting situation cause I want to be in the big leagues and help this team win but I’ve played with him for years and I love being his teammate.  So I want him to get back too.”