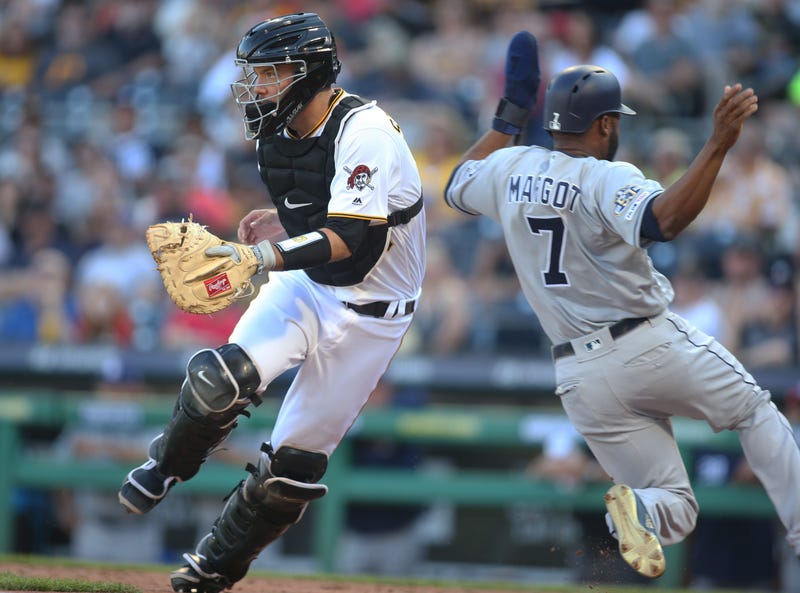 PITTSBURGH (93.7 The Fan) - After the Pirates 6-3 victory over the San Diego Padres Saturday afternoon at PNC Park, Pirates Catcher Jacob Stallings joined Dan Zangrilli and Jack Zduriencik on Pirates Fan Reaction to discuss his performance, Chris Archer's performance on the mound and his relationship with the pitching staff as a whole.

"He actually did not throw any (two-seamer's) today, we stuck all four-seamers and used the changeup a lot more today," said Stallings. "He was strickly four seam today, I thought his fastball command was pretty good and I thought his slider and changeup were really good with the exception of the home run to Machado. I mean to only give two hits through 5 innings to a team with that much thump in their lineup, he was great, it was awesome."

Was the decrease in usage of the two-seam fastball and increased usage of the changup a collaborative gameplan between Archer, Ray Searage and himself?

"The first couple starts I had him we had a lot of success, decent amount of success with the two-seam fastball getting some groundballs and getting some early contact," said Stallings. "I think hitter's made an adjustment and maybe we didn't do a good enough job of making an adjustment. Me and Arch (Archer) talked about it probably 3 days ago, he came up to me and he asked me what I would think about strictly 4-seams and I was on board with that. It's something (the two-seamer) that we still have in our back pocket to in the right time to hopefully get a groundball out of it, but he was confident with his 4-seamer today and coming into today's game and so we stuck with that."

All the Pitchers have been very complimentary of the work that Stallings puts in on a daily basis and he discusses with Dan and Jack what that means to him to have that kind of trust with the entire pitching staff.

"It's really pretty easy for me because all these guys are some of my best friends' and I just care and want them to do so well," said Stallings. "Maybe I help them too much, but I help them whenever I can and it just really comes back to wanting them to do well and wanting the team to do well. I don't really know if I can take much credit for it."

Dan and Jack also discuss with Stallings about Archer's changeup usage, how effective that pitch is and could we see him continue to use it more.  They also discuss Stallings' day at the plate and just how everyone on the Pirates bench lately has seemed ready to go when called upon at any point in the game.