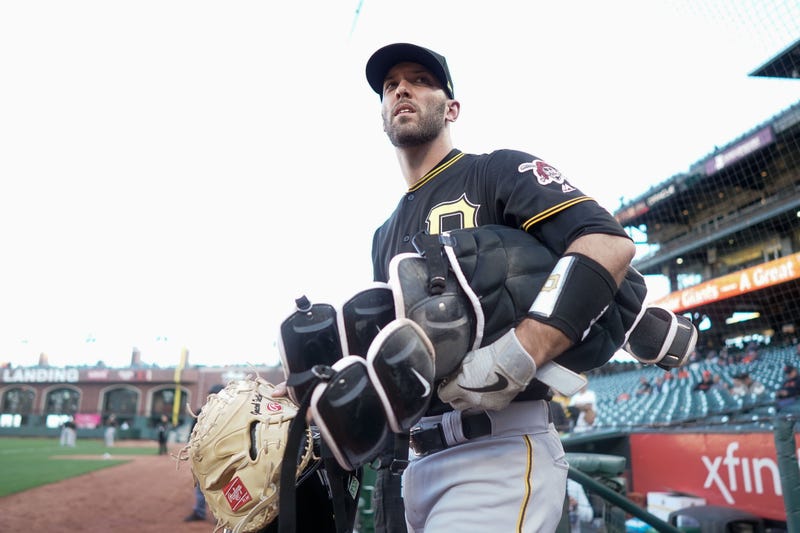 PITTSBURGH (93.7 The Fan) - From the Pittsburgh Pirates fearing they would lose him on waivers after Spring Training and early on this season, Catcher Jacob Stallings has taken advantage of every opportunity this season he's been given and has made it hard for Manager Clint Hurdle to take him out of the lineup.

One of the aspects of Stallings game that he is most proud of and thinks he has improved upon is his pitch framing.

"I guess the biggest takeaway would just be getting better at the receiving stuff," said Stallings. "It was a big focus ever since I came back from Triple-A and just feel like I've grown a lot in that area and hopefully can continue to get better at."

Stallings has played to a .992 fielding percentage this season and has only committed three passed balls and four errors while throwing out 42% of the runners attempting to steal against him. He also has picked off three runnings leading off of the bases.

With Francisco Cervelli in the Atlanta Braves organization now and Elias Diaz's struggles at times this season, there is an opening on this team for a catcher to grab the #1 spot and run with it.  Is that something that Stallings is looking forward to have the opportunity to earn heading into next Spring Training?

"It be great (to win the job)," said Stallings. "I think my first goal is just make the team out of camp again and whatever happens in terms of playing time I know it will be the best for the team and whatever gives the team the best chance to win. As long as I'm on the team then I'm happy with whatever role that I can have."

The entire Pirates pitching staff has been very complementary of Stallings and his game calling all season and Stallings says knowing the pitchers have the confidence in him only helps him gain confidence when he's behind the plate.

"It's huge, I think that's kind of the thing that kickstarted kind of my confidence in myself," said Stallings. "Kind of when Chris (Archer) asked the staff if I could catch him one start and it went pretty well and I kept catching him. That gave me my first real opportunity at regular playing time, so I was thankful for that. Just as a staff it's cool to have guys say that and it gives you confidence."