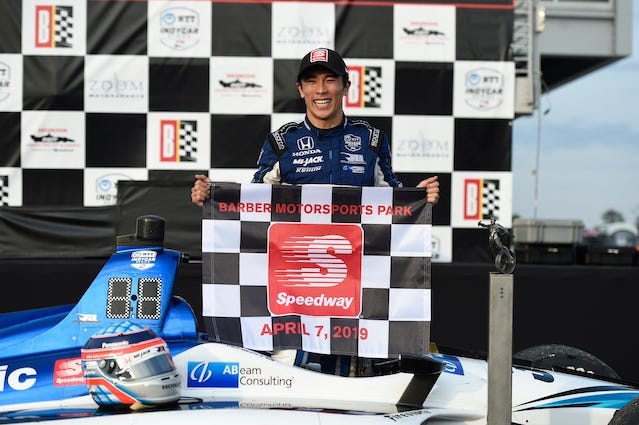 Leeds, AL (93.7 The Fan) – Rahal Letterman Lanigan Racing’s Takuma Sato started from the pole position and led 74-of-90-laps to win Sunday’s Honda IndyCar Grand Prix of Alabama at Barber Motorsports Park.  The win was the first of the year for Sato, fourth of his 10-year IndyCar career and RLL Racing’s first win of the year.

“It’s probably the cleanest race I ever won,” said Sato, the 2017 Indianapolis 500 winner.  “Outside, (it) probably looked easy winning from the cruising and the pole position, but it wasn’t really cruising.  This is because of the team; they did a fantastic effort.  My car was superb!"

“I’m really pleased for Takuma, he drove beautifully,” said team co-owner Bobby Rahal.  “The team did a fantastic job, pit stops were great, strategy was great.  But I honestly think Takuma was in a league of his own.”

Chip Ganassi Racing’s Scott Dixon finished 2.3874-seconds behind Sato to finish second in the No. 9 PNC Bank Honda.  The second-place finish was a record sixth for Dixon at Barber, one of the only tracks where the 5-time NTT IndyCar Series Champion has not scored a victory.

“We’ve got to be happy with that,” said Dixon.  “We started off where we could push really hard and be really quick and close the gap, even on some of those crossovers in the pit we were able to hone in on both Graham (Rahal) and (Takuma) Sato early on in the race, but the last 10-laps were miserable.  Another second and now second in points.  Hopefully, we can try and get a win here one day.”

Sebastien Bourdais finished third in the No. 18 SealMaster Honda for Dale Coyne Racing with Vasser Sullivan on the strength of a two-stop pit strategy.

“I guess we were one of the rare teams to stick to the two-stop strategy,” said Bourdais, a four-time Champion.  “Dale (Coyne, team owner) has a heck of a lot more faith in me than I have in myself, that’s for sure.  On lap 18 I said, ‘I don’t think I can hang onto the car for another 10-laps’ and he was like, ‘well you’re committed now’, so I wasn’t quite sure about it, but it worked out.”

“I had a good run on him, and he went pretty deep into the corner and I locked the front up and just went into him a little too aggressively,” said Newgarden.

“We started eighth, finished fifth,” said Rossi.  “We didn’t really have a car to fight for the win, which was disappointing.  We need to get our game together and regroup for Long Beach next weekend.

“Certainly, a bit disappointed,” said Hinchcliffe.  “I feel like we left a couple of positions out there today.  The pace was good all weekend and if we keep doing that, eventually our day will come.”

“Going from an obviously disappointing qualifying starting from P20 going all the way up to P7, I think that shows the potential we have and the whole package that we’ve got,” said Ericsson.

The next NTT IndyCar Series race is the Acura Grand Prix of Long Beach on Sunday, April 14.  The race will be televised by the NBCSN and can be heard on Advance Auto Parts IndyCar Radio Network affiliates.