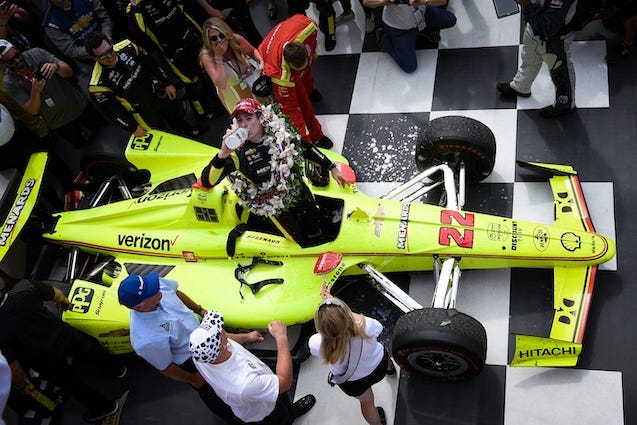 Pagenaud and Rossi swapped the lead back and forth over the last 3 laps with Rossi taking the lead across the yard of bricks with 3-to-go.

Pagenaud took the lead back with 2-to-go heading into turn 3 and held off Rossi over the last lap, putting the No. 22 Menards Chevrolet in victory lane.

“When you have a car like this, a team like this, you just work your way,” said Pagenaud.  “It’s about achieving and executing in the end and we did execute perfectly today.  No mistakes like we talked about and here we are in victory lane.”

Pagenaud became the first pole winner to win the race since Penske's Helio Castroneves in 2009.

“Can you believe he won that thing,” team owner Roger Penske gushed.  “What a job Simon’s done this month.”

The victory is Penske’s 18th Indy 500 victory and 206th IndyCar Series win.  The win is also the second straight year Penske has swept the month of May.

Rossi overcame a 23-second pit stop on lap 138 due to a fuel probe fuel probe issue and was obviously disappointed his No. 27 NAPA Auto Parts Honda finished second.

“They did a great job,” said Rossi.  “We just didn’t have enough there in the end.  We recovered from a difficult pit stop but unfortunately nothing else matters here but winning.”

The incident started when Rahal Letterman Lanigan Racing’s Graham Rahal got a run on Dale Coyne Racing with Vasser Sullivan’s Sebastien Bourdais on the backstretch heading into turn 3.  The pair made slight contact before the corner but once they got to the corner, they got together again bringing out the caution and ending both of their days. Rahal finished 27th and Bourdais finished 30th.

IndyCar red-flagged the race on lap 180 to clean up debris.  The red flag lasted 18-minutes.  It was the first red flag in the race since 2017 when Jay Howard hit the wall, collecting Dixon and launching him 350-feet through the air in the South short chute.

The race featured 10-leaders, led by Pagenaud’s 116, and was slowed by 4-caution periods for 29-laps.

Next up for the NTT IndyCar Series is the “Duel in Detroit”, next Saturday and Sunday on Belle Isle.