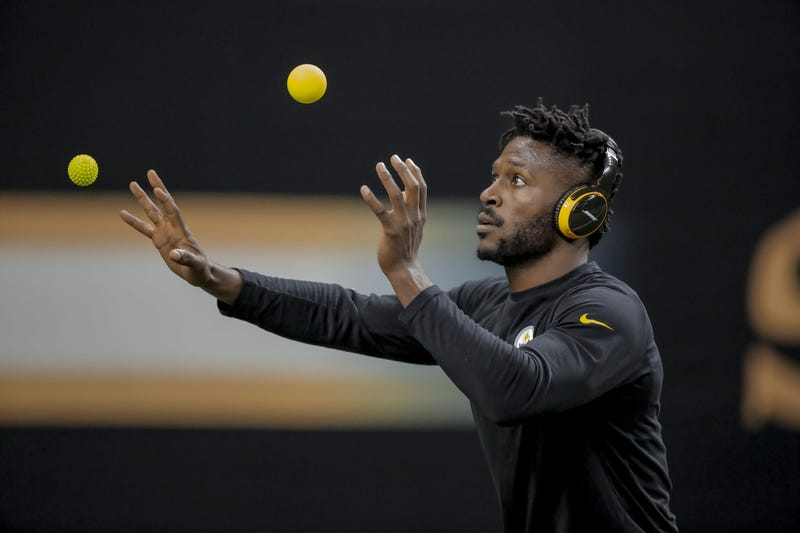 All of them. All the time. They have us captivated and entranced, caught in a constant state of "I can't miss what's going on in the world" that many times we are missing what's right there in front of our face in, you know, our real lives. But, hey, I guess it is what it is. And if nothing else, it is constant. The stream flows unwaveringly and without fail.

It seems those three vehicles have been a constant conduit into the life of Steelers receiver (perhaps soon-to-be ex-Steelers receiver) Antonio Brown. Through those means we have come to know that AB is on vacation and while on vacation in beautiful Turks and Caicos he's decided that he needs a change. So he dyed his mustache blonde. Yes, the Mustard Mustache -- has a nice ring to it, but if you ask me (and I'm surely no expert) it looks insanely odd. It looks to me like he ate something and forget to use a napkin after his meal.

Anyhow, back to the point of all this: You do realize we will get no break from this whole thing, right? For the next month and a half, this will be our life as Steelers fans and people who consume this franchise. There was once an offseason, but now we are relegated to the silly season; the silly season of grabbing our iPhone or maximizing that one screen at work that we don't want the bosses to see a few times a day to check on the happenings of AB. I'm not saying it's good or bad. I'm just saying to be prepared because that's what our existence will entail between now and mid-March when the Steelers would owe him a $2.5 million signing bonus if he is still on the roster.

I don't know if he will or won't get traded --- I'm leaning toward the fact that he will because his relationship with the Steelers is unable to be mended at this point --- but he will be a daily item on your check-off list of things to do. Breathe, pack a lunch, be sure the kids have their backpacks packed for school, see what AB is up to, make the bed, get the mail, etc.

The happenings of Antonio Brown have thrust themselves into the front of our mind and they will continue to until this is all resolved. If he is pictured working out with a green shirt on, surely the rumors will start that he's going to the Packers! If the plate of food he Instagrams from his chef guy Ed Choppo has a bunch of green melon, certainly it's a sign he's headed to the Jets! If AB is playing catch or running sprints with a red pair of shorts on (he never wears a shirt) the Twitter machine will work overtime to tell us that it is now a lock he's going to be Jimmy G's man out by the bay! If that mustache gets dyed blue anytime soon? Well, look out Indy! I saw it on Snapchat!

So here's your warning, or maybe not a warning. He's just a friendly reminder --- there will be twists and there will be turns. We are in the silly season of AB. This whole thing doesn't look to be any closer to being resolved. And, just so you know, even if you think you can fight it, you're going to be captivated by it for the next month and a half or so. You say you're tired of it, but you won't look away.

You can't put it down.