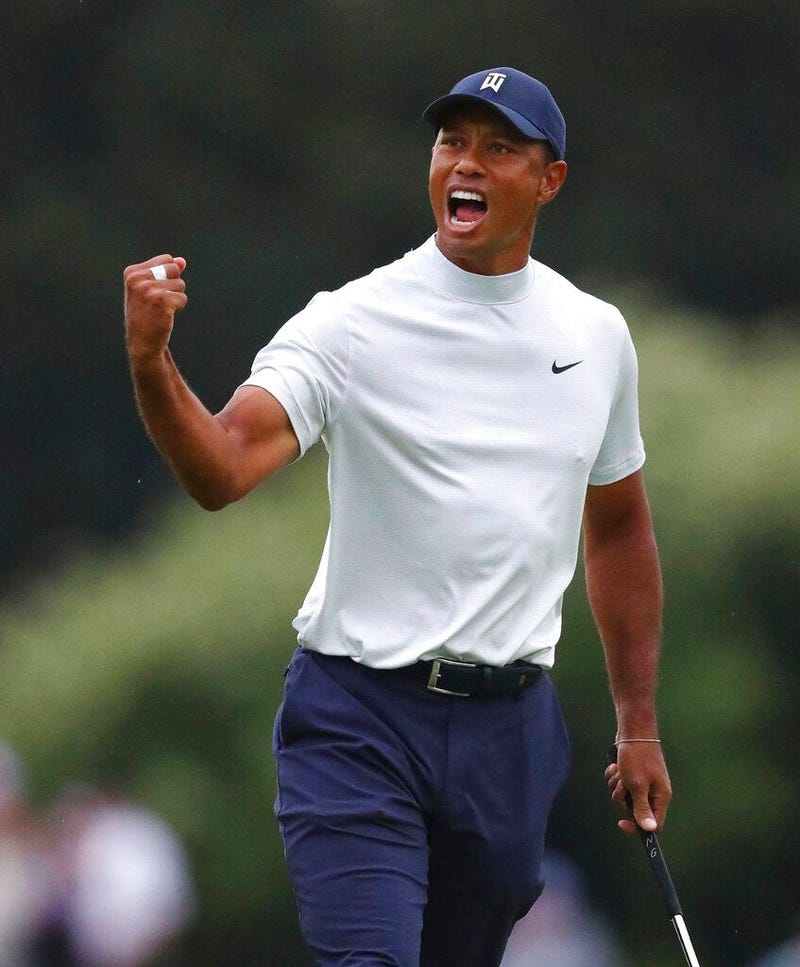 AUGUSTA, Ga. (AP) — The top of the Masters leaderboard is a crowded place after two rounds, with Francesco Molinari, Jason Day, Brooks Koepka, Adam Scott and Louis Oosthuizen in a five-way tie for the lead.

Then there's the man lurking one shot behind: four-time tournament winner Tiger Woods.

The 43-year-old Woods, who won his last Masters in 2005, turned back the clock with four birdies in his final 10 holes on Friday, thrilling the Augusta National crowds with a handful of big putts and some vintage fist pumps.

"I feel like I played my own way back into the tournament," Woods said. "I was just very patient today, felt very good to be out there doing what I was doing. This is now three straight majors that I've been in the mix and so it's good stuff."

Woods shot a 68 and has plenty of big-name company among the leaders, including 48-year-old Phil Mickelson, who didn't have his best round with a 73 on Friday, but is still just three shots off the lead.

"There's nothing better than having a chance going into the weekend at the Masters," Mickelson said. "And that's what I want to focus on and I know that I'm playing well enough."

Molinari is trying to win his second major in two years after winning the 2018 British Open. The Italian played a bogey-free round, finishing with a 67. Day also shot a 67.

All of the five leaders are major champions and three have been No. 1 in the world.

Woods is tied at 6-under for the tournament with Dustin Johnson, Xander Schauffele and Justin Harding, who is the only Masters newcomer in the group. Ian Poulter and Jon Rahm are at 5-under.

Koepka and Bryson DeChambeau started Friday with a one-shot lead. The 28-year-old Koepka, a three-time major winner, made birdie on No. 18 to salvage a 71 and stay tied for the lead. DeChambeau faded with a 75.

It's been 11 years since he won his last major and had five surgeries since then, including four on his back and the other to rebuild his left knee. It's hard to believe considering the way he was playing on Friday.

Now comes the weekend, and it certainly has the potential to be a classic Masters finish.