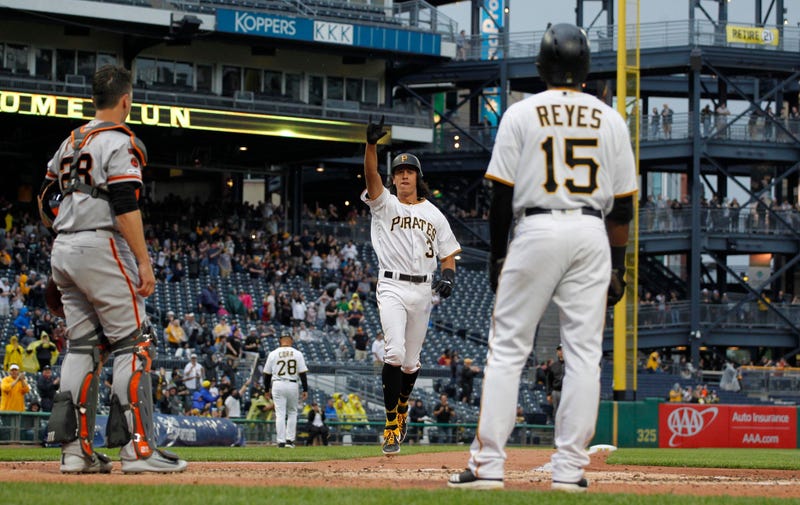 PITTSBURGH (93.7 The Fan) - With rain starting to fall and lightning off in the distance, Pirates Shortstop Cole Tucker came to the plate with the game tied at 1 and promptly drove a ball into the wind over the Center Field fence at PNC Park to give the Pirates a 3-1 lead and after a lengthy rain delay turned into the Pirates victory.

"I just wanted to come in and help us win and to actually kind of do that, that was really special to me," said Tucker. "I knew what was happening, I hit it and knew that I got it, I was like that felt amazing. And I was pretty calm rounding first and second and then when I saw Joey (Cora) and I saw the guys in the dugout, just saw fans (that were) visually happy that I did that and that I'm here. I just kind of lost it, I started screaming and just yelling, I was slamming my helmet on the ground and I just kept screaming when I got in the dugout, I felt possessed man, it was so cool."

On what was going through his mind during his at-bat in the 5th inning:

Jung Ho Kang got the Pirates on the board with his third home run of the season to left field that put the Pirates up 1-0 after 4 innings.

Pirates Outfielder Bryan Reynolds made his debut Saturday afternoon also and got his first major league hit off of San Francisco Giants Pitcher Derek Holland when he singled to left center in the 4th inning and talked about what it was like debuting and getting his first hit against the team that traded him to the Pirates last off-season.