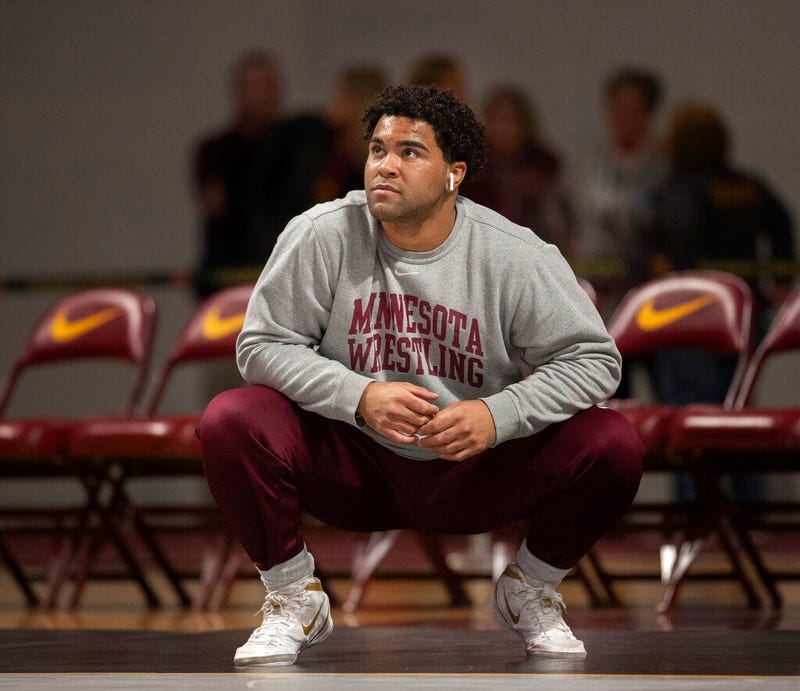 MINNEAPOLIS (AP) — A star wrestler for the University of Minnesota is shocked by his arrest on sexual misconduct charges, as he has nothing to hide and has been cooperating with investigators, his lawyer said Monday.

Steveson, a heavyweight who placed third at this year's NCAA championships, and Martinez, who is on the team but didn't compete last season, were arrested after someone reported Saturday night that they had been raped and went to a hospital for treatment. The alleged attack happened shortly after 1 a.m. Saturday, according to a police report released Monday that lacked many details, including the age and sex of the accuser or specifics about what allegedly transpired.

Steveson's attorney, Christa Groshek, said Steveson is shocked by his arrest and that he had been cooperating with police "because he felt that he didn't have anything to hide."

It wasn't immediately clear whether Martinez has an attorney. Messages left with several possible relatives were not returned.

The university's athletics department said in a statement it was "aware of a situation involving two of our student athletes" and that the two were suspended from all team activity pending further information. The statement didn't identify the athletes or their sport.

Hennepin County prosecutors have until noon on Tuesday to charge the two, seek an extension or release them.

Steveson was a four-time state champion at Apple Valley High School. He had a 35-2 record this season — his first competing for the Gophers — and he placed third at this year's NCAA championships. Martinez didn't wrestle last season and was listed as a redshirt sophomore. He wrestled for Fresno (California) City College before enrolling at Minnesota.

This isn't the first time that University of Minnesota athletes have been accused of sexual misconduct.

In September 2016, a female student alleged she was gang raped in an incident that implicated 10 football players. Criminal charges were not filed, but five students were ultimately expelled or suspended, while five others were cleared. Then-football coach Tracy Claeys was fired after he expressed pride in the players.

Minnesota basketball standout Reggie Lynch was accused of sexual assaulting two women on separate occasions in 2016. He was never criminally charged and denied the allegations, but dropped an appeal of his expulsion last year.

Also in 2016, wrestling coach J Robinson was fired after an investigation into the way he handled an alleged drug ring involving the anti-anxiety medication Xanax. Four wrestlers were suspended in connection with that incident.