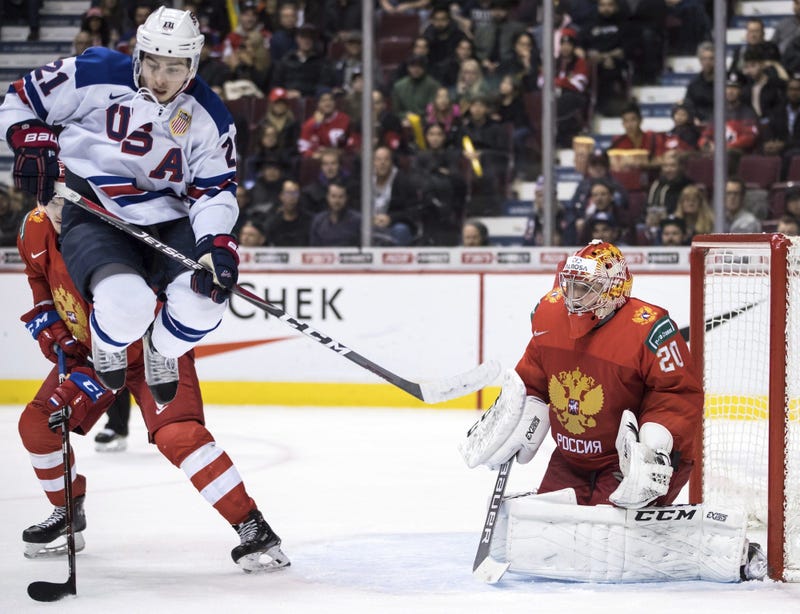 VANCOUVER, British Columbia (AP) — Cayden Primeau made 35 saves, Oliver Wahlstrom and Alexander Chmelevski scored and the United States advanced to the world junior hockey final with a 2-1 victory over Russia on Friday.

“He’s a pretty quiet guy, but he’s a stone-cold killer!” U.S. defenseman Phil Kemp said about Primeau. “He’s seeing beach balls out there, and we’re grateful to have him in the cage.”

Seeking its fifth title and first since 2017, the United States will face Finland in the championship game Saturday night.

“It’s huge for USA Hockey, but USA Hockey, we demand gold,” Kemp said. “We want gold. We’re here for gold. We’re going to rest up, get back to the hotel, put our feet up, and get ready to go for tomorrow.”

Primeau is a freshman at Northeastern.

Finland beat Switzerland 6-1 in the second semifinal after upsetting Canada 2-1 in overtime on Wednesday night in the quarterfinals.

“Of course they are the favorites, but I think we have a good chance if we battle hard,” Finnish coach Jussi Ahokas said. “We’re the guys who control the puck.”

Wahlstrom opened the scoring with 5:31 left in the first period. Forward Logan Cockerill powered down the ice, faked a shot and sliced the puck to Wahlstrom. The U.S. made it 2-0 on a power play at 4:20 of the second after Vitali Kravtsov was called for tripping. Jack Hughes got a pass off to Chmelevski directly in front of the net, and Chmelevski poked it under goalie Pyotr Kochetkov.

Denisenko pulled Russia within one with 5:24 left in the second, going down the boards and getting a shot up and over Primeau.

Russia had a goal waved on in the first period after a review determined Nikita Shashkov kicked in the puck.

“We got a lucky bounce and they decided to call it off,” Primeau said. “It was definitely a big one there and we got back to work.”

Another close call came on a Russian power play early in the third period. Klim Kostin’s shot left the puck rolling along the goal line before U.S. defenseman Phil Kemp swatted it out of the way.

“They had some good opportunities. I thought Primeau had some good saves late in the third,” U.S. forward Josh Norris said. “He kept us in and we buried on our chances. It was a good job by the guys.”

“We came flying on the first period,” Heponiemi said. “I just really enjoyed the whole game.”

In relegation play, Demid Yeremeyev made 25 saves and Kazakstan beat Denmark 4-0 to sweep the best-of-three series and remain in the field for the event next year in the Czech Republic. Sayan Daniyar and Davyd Makutski scored in the first period and Artur Gatiyatov had two late empty-net goals.

Denmark dropped to Division I, with Germany moving up.