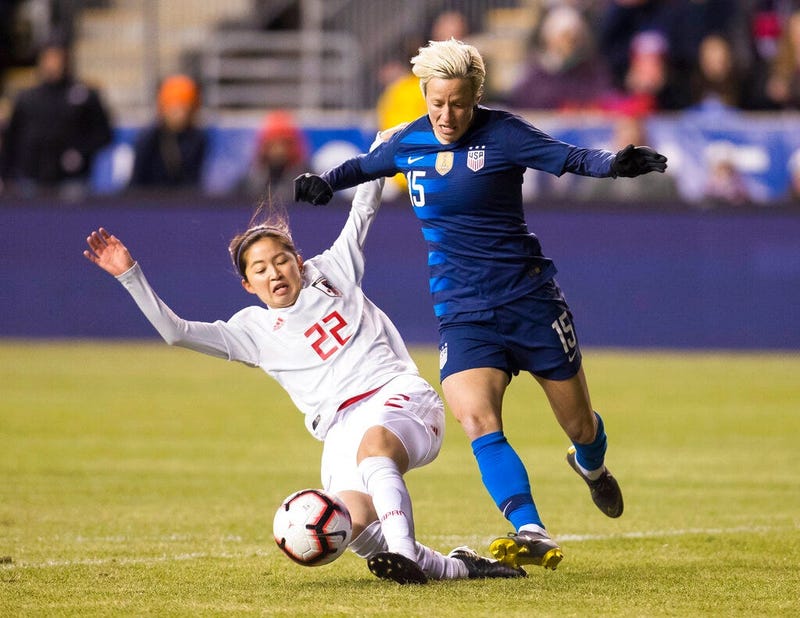 Megan Rapinoe also scored for the Americans in a rematch of the last two Women's World Cup finals.

Emi Nakajima scored in the 67th minute for eighth-ranked Japan after a poor clearance from Tierna Davidson, and Morgan chested home the go-ahead goal in the 77th minute off a pass from Christen Press — a minute after Press entered the game.

But Momiki stunned the crowd with a 91st-minute goal from close range.

The match was part of the opening day of the round-robin tournament that features four of the world's top 10 teams. England beat Brazil 2-1 in the first game of the doubleheader at Talen Energy Stadium, home of Major League Soccer's Philadelphia Union.

Exactly 100 days before the orld Cup kicks off in France, U.S. coach Jill Ellis deployed a mostly first-choice lineup with the exceptions of the injured Lindsey Horan and Becky Sauerbrunn.

In the 23rd minute, Tobin Heath beat defender Saori Ariyoshi to the end line and set up Rapinoe for an easy tap-in goal.

Rapinoe had other scoring opportunities in the first half, including a 39th-minute free kick that goalkeeper Erina Yamane pushed off the post. Japan's best chance came in the 11th minute when Kumi Yokoyama smashed a shot off the crossbar.

The Americans moved to 28-1-8 against Japan, with the only loss coming in the 2011 World Cup final. The U.S. beat Japan in the 2012 Olympic final and in 2015 World Cup final behind a hat trick from Carli Lloyd.

Lloyd, who grew up about 30 miles from Talen Energy Stadium, entered the game for Morgan in the 85th minute to a rousing ovation from the hometown crowd. She took the final shot of the game, but it was easily saved.

The Americans will face England in Nashville, Tennessee, on Saturday, and close out the tournament against Brazil in Tampa, Florida, on Tuesday.