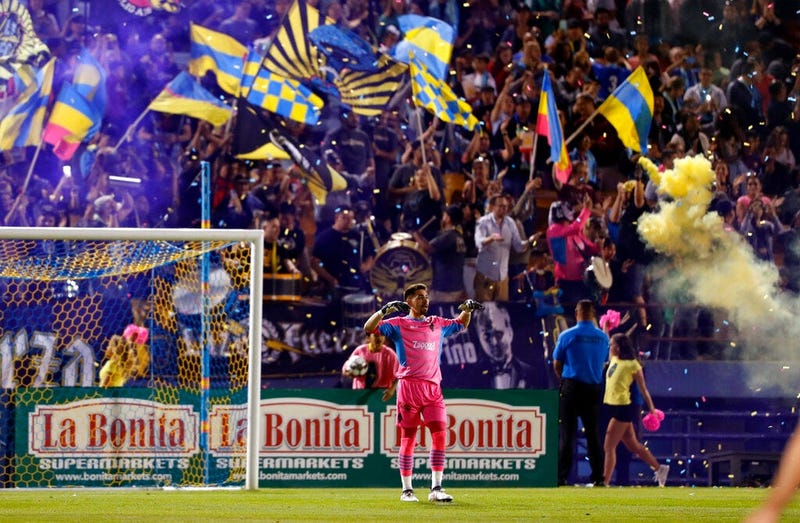 The City Council plans to vote Wednesday whether to give The Renaissance Companies Inc. six months to come up with a plan involving Cashman Field, which opened in 1983 as a Triple-A baseball stadium and now houses the minor-league soccer team Las Vegas Lights FC.

Lights FC owner Brett Lashbrook told the newspaper the plan would have him sell his United States Soccer Federation team to an investor represented by Renaissance.

Lashbrook said Friday the goal is for the club to move up to the MLS and play in a new stadium built on the development site.

Goodman and Lashbrook said Lights FC soccer, which started as an expansion team last year, has benefited the Cashman Center area north of downtown and shown that professional soccer is popular in the city.

Lashbrook told the Las Vegas Sun he expected the council will approve the agreement and said he was excited about the growth of soccer in Las Vegas.

MLS began with 10 teams in 1996 and now has 24 teams. It plans to expand to 30 franchises, and league Commissioner Don Garber said last month that Las Vegas; Charlotte, North Carolina; Phoenix and Detroit were being considered for the last spot.

In 2015, the league passed in 2015 on a Las Vegas bid that involved a proposed $201 million soccer stadium on vacant land west of downtown.

Baseball moved this year to the new Las Vegas Ballpark in the suburban Summerlin community of northwest Las Vegas. The team is now called the Las Vegas Aviators and is affiliated with the Oakland Athletics.