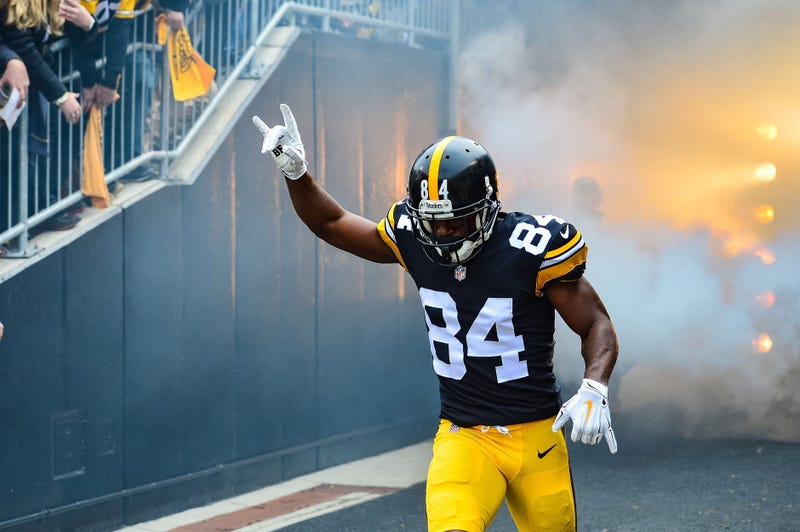 PITTSBURGH (93.7 The Fan) - I think --- just purely opinion here --- that there's no way in the world the Pittsburgh Steelers will get a first-round pick in trade exchange for Antonio Brown.

Not now. Not that he's pretty much gone off the deep end. Not now that he gets more bizarre with seemingly every social media post and it feels like some of us are just waiting for him to do something really, really, really dumb --- because driving down McKnight Road at 100mph was only really, really dumb.

You know, I think it is a big stretch at this point to even think the Steelers might get a second round pick for Brown. Eh, one team might jump and overpay, but the guess here is that all teams have done an analysis on the potential trouble Brown would present coming in against the potential value lost in a second round pick and the latter would win out. It would be a no-go for AB at that cost.

A third round pick? Iffy. At best.

The concrete thought here is that, because of all the shenanigans off the field, a team would be silly right now to offer anything more (in a first offer) than a fourth-round pick because they know Antonio Brown is halfway to going mad and also the Pittsburgh Steelers are over a barrel in the situation. In short, he doesn't want to be in Pittsburgh, the Steelers don't really want him in Pittsburgh, teams know all this but there is still a contract he's under through the 2021 season.

Crazy times in Steelville, to be certain. Tumultuous times for Tony Toe Tap or whatever it is people are calling him this week. Or maybe I should Call God and find all the answers, who knows?

Now let's try this one on for size: What if things get even crazier? What if the Steelers --- who one would think have to be actively shopping the dynamic receiver per his wishes --- end up not finding a trade partner. What if the other 31 teams in the NFL do the internal, AB feasibility study and just arrive at the conclusion they don't want the guy around at any cost. Not even a sixth round pick.

Remember, it was Art Rooney II in a wonderful interview with the Post-Gazette's Gerry Dulac last month, who said the Steelers would not release Brown but that “all other options are on the table.”

Again, what if those other options --- seemingly trade prospects --- dry up?

Let's imagine for a moment a world where Antonio Brown is forced back upon the Pittsburgh Steelers for the 2019 NFL season. Again, I think the chances of Brown being gone currently are at about 99.98 percent and growing, but let's just say for a moment that heavy underdog comes home and he finds himself property of the Steelers when it comes time to report to St. Vincent --- and chopper or no chopper he shows up.

Would the Steelers have the audacity to suspend him for the opener --- or even longer --- because of conduct detrimental to the team during the end of this past season and thereafter? In my opinion they should if it came to that, and they wouldn't just be well within their rights, they would be making the correct decision as his behavior has been bizarre at best and reprehensible at worst.

If he somehow found his way as part of the 2019 Pittsburgh Steelers, would the team give him a hat for the duration of the season? Would they dare make him inactive for a time and just "let him rot" as so many fans have said they should do? I don't think the Steelers would, but it is an interesting thought.

And let's lastly imagine if Antonio Brown were a member of the Pittsburgh Steelers in 2019 and, somehow he came back and was active and went through camp and everything. Can you really reconcile in your mind any way that he could make it through a season (especially with JuJu becoming a star) without having a major blowup at the head coach, a coordinator, the quarterback or someone who draws a paycheck from the same organization? As much as I'd like to think he could, my brain and recent history tells me there is about a 0.00 percent chance that would happen.

It is with all that said the thought of Antonio Brown in a Steelers uniform in the future appears all but dead. But in the slim chance it were to happen, as impossible as it is to imagine, things might get even weirder than they are now with AB.