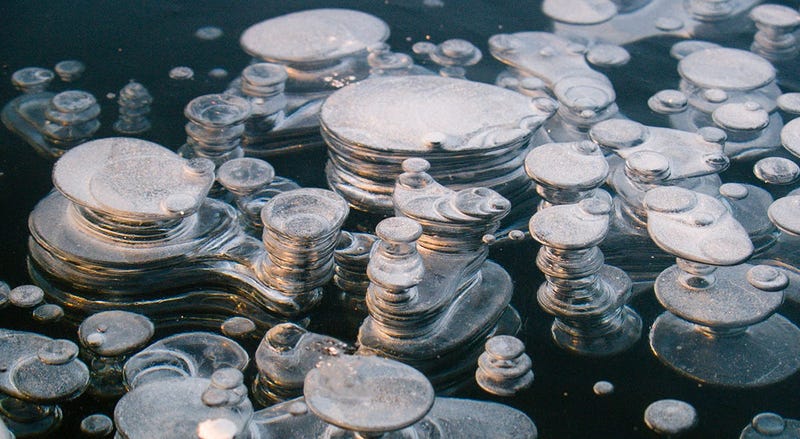 February 11, 2019 02/11/2019 7:55 pm
Eerily gorgeous photos of frozen methane bubbles have been making the rounds online recently, captured in symmetric patterns like strings of fantastic, luminous milky beads; or clustered like frosty moons in an icy orbit.

Unless it’s frozen or flaring, we rarely see or even smell methane. But the chemical compound (CH4) surrounds us:

“Methane bubbles up from swamps and rivers, belches from volcanoes, rises from wildfires, and seeps from the guts of cows and termites (where is it made by microbes). Human settlements are awash with the gas. Methane leaks silently from natural gas and oil wells and pipelines, as well as coal mines. It stews in landfills, sewage treatment plants, and rice paddies.”

Source:    Adam Voiland, “Methane Matters,” NASA Earth Observatory
Rocket scientists (real ones!) are even debating the possibility that methane exists on Mars.
There’s no argument about methane’s prevalence in Earth’s atmosphere. There’s also no argument about its contributions to climate change. Much more than just cow farts, it’s a powerful greenhouse gas that traps heat 86 times more effectively than carbon dioxide over a 20-year span.

It’s definitely a naturally-occurring compound, but the U.S. Environmental Protection Agency identifies it as the second-most prevalent greenhouse gas emitted in the United States from HUMAN activities. It’s the main component of natural gas: the EPA estimates that the oil and gas industry contributes about a third of the United States’ overall methane emissions.

Scroll back up to that elegant description of methane and note the phrase about it “leak(ing) silently from natural gas and oil wells and pipelines.” Yes, the “emissions” from the industry are actually a fancy word for “leaks.”  Quantifiable amounts of a vitally important natural resource are wasted in the extraction and transportation process – at least $20 million dollars’ worth floats away each year over PA. Poof.
That’s got to be annoying to the 51% of Pennsylvania households that pay natural gas bills to heat their homes. But it’s the witches’ brew of airborne toxins released by that faulty plumbing that’s truly alarming: escaping waves of methane are often mingled with pollutants like the carcinogen benzene and other health-impacting chemicals.

The Clean Air Council has made methane capture in Pennsylvania’s energy industry a high priority. "Pennsylvania is the second-largest natural gas producing state in the country, just behind Texas,“ according to Philadelphia CAC staff attorney Robert Routh, so clamping down on escaping  methane would mean measurably cleaner air, retained gas inventory, and jobs to monitor the infrastructure as well as plug the leaks… while keeping some of that heat-trapping greenhouse gas out of the atmosphere.

“While Governor Wolf and the Department of Environmental Protection just last summer put into place -- for the first time -- methane controls on the oil and gas industry for new sources, sources not yet built,“ Routh said, “there are thousands of  oil and gas facilities that don’t have any state methane controls applied to them.  While new sources were a great first step, the existing sources are what’s polluting our air every day.”

Environmentalists all over the state are lobbying to get methane controls enacted for all oil and natural gas infrastructure.

The Environmental Defense Fund has launched a public service campaign to encourage citizens across the Commonwealth to reach out to Governor Wolf to encourage meaningful and effective methane regulations.

If all that vented methane is making you mad, you can vent to the Governor by phone at 717/787-2500 or social media @GovernorTomWolf.

Environmentalists all over the state are lobbying to get methane controls enacted for all oil and natural gas infrastructure.