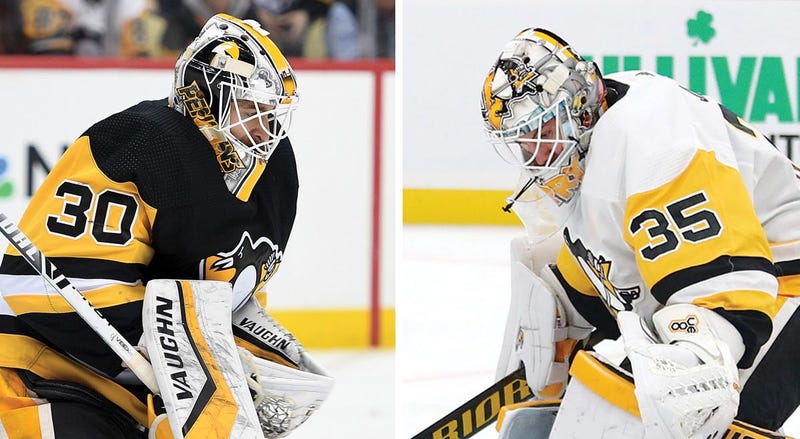 Which Pens’ goaltender has the No. 1 tag?

Coach Mike Sullivan is fond of answering this question by saying he has two good goaltenders, and in this case I don’t think he’s dodging the question. He’s absolutely right not to get caught in the debate, because the play of Matt Murray and Tristan Jarry will provide the answers on a game-by-game basis until the opening night of the playoffs.

Then Sullivan has to answer it. How that will turn out is really anyone’s guess, although in a moment I’ll provide an important reminder.

Jarry has decidedly better numbers in just five fewer starts than Murray this season, but Murray had started four of the last six games when he played Thursday in Tampa Bay. That’s because in the last two weeks, Murray has been a bit better – not that Jarry has been performing poorly. Jarry had started 13 of the previous 17 games because he was clearly delivering better performances – so Murray mostly sat.

Jarry is starting tonight in Florida. And so it goes. And will continue to go.

Sullivan’s dispensation of playing time will tell you which goaltender’s game he likes better at the moment, and there’s zero need to attach a label to either one. He’s clearly not going to alternate starts, and he’s clearly going to split time in back-to-back situations, but otherwise he’s likely to continue giving more time to the guy he believes deserves it at the moment, however nuanced that decision turns out to be.

Sullivan has done a really nice job of dispensing playing time between the two, basically letting their performances dictate workload but also giving Murray the right openings to prove he was over his mid-season slump. And Murray has done that, winning eight of his last 11 decisions. He’s a bigger goaltender and succeeds when using that size and playing aggressively.

Now it’s Jarry’s turn to try and grab more playing time back. He was never going to continue putting up the numbers he deliveredover the final six weeks of the 2019 calendar year – no one could – and now Jarry needs to try and push his game back toward that level. He’s easily the better puck-handler and more athletic in the net.

It’s ridiculous to say today how playing time should be dished out through the final two months of the regular season. Let the play of these two determine it, and let a coach who has quite a history of making the right decisions make those decisions.Meanwhile, let the competition between the two serve to push both of them and help the team.

And yes, there is a caveat.

That’s just reality. Sullivan hasn’t forgotten what Murray did in 2016 and 2017, nor should he. And he’s too good a coach to ignore the signs if Jarry, despite never having played in the Stanley Cup playoffs, looks like the right choice – as he was for a big chunk of this regular season. Sullivan owes that to his teamand himself.

Unless the play of one of these two drops off dramatically between now and the playoffs, the Penguins are winners here. They get two guys pushing each other, with another level of motivation to play well, and Jim Rutherford gets added value to two younger players before one of them is traded – which has to happen before the expansion draft in the summer of 2021 and could happen sooner if Rutherford decides his cap budget can’t accommodate them both next season when they’ll be playing under new contracts.

And for now, they’ve got two good goaltenders and no No. 1. As it should be.