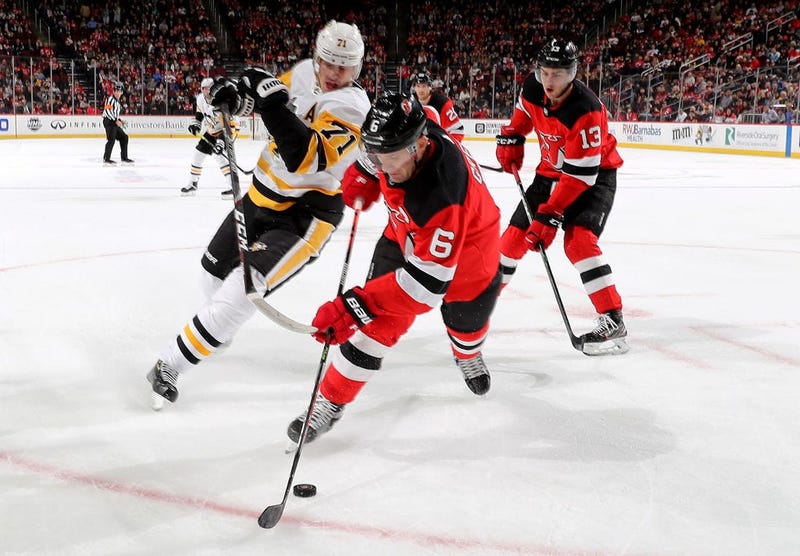 In their first game since the news of Sidney Crosby’s surgery and expected absence from the lineup for at least six weeks, the Penguins went out and basically dominated the Devils in New Jersey Friday night.

It’s been a familiar theme this season, and the 2-1 loss to the Devils only underscored the simply reality that coach Mike Sullivan’s team has a very, very thin margin for error right now given their lack of offensive productivity and penchant for falling behind in games. One fluke first-period goal by Travis Zajac and a brutal mistake by Matt Murray in the final five seconds of the second period is all it took for the Devils – who are basically a train wreck this season – to prevail.

It’s not just figuring out how to win without Crosby. It’s figuring out how to win without Crosby, Kris Letang and Patric Hornqvist. These are all leaders with critical roles to play on the team, and Friday night proved quite succinctly that you can’t just throw the whole burden on the back of Evgeni Malkin. He was very good in New Jersey and long ago proved he will take his game to another level when Crosby is out.

Malkin needs Jake Guentzel, who was moved to his line Friday, to finish his fair share of chances. Guentzel has been fine this season and is on pace to score 35 goals, but right now his team needs him to shoulder perhaps an even bigger scoring load. Malkin needs Alex Galchenyuk to, you know, kick in more than zero goals. Malkin needs the power play to quickly emerge from a 1-for-32 funk.

The power play, especially, continues to handcuff the Penguins. It was hoped that Jared McCann’s power play goal Tuesday in New York would signal they’d turned a corner, but those feelings were largely gone by the end of Friday’s game when the Penguins went 0-for-3 against one of the NHL’s worst penalty killing teams.

Sullivan doesn’t need his team to play better defensively, because they’ve been quite good through the first quarter of the season on that count. Their penalty killing has been exceptional at No. 2 in the league; at the final horn Friday, they were allowing an NHL-low 28.6 shots per game and just 2.58 goals per game – fifth-best in the league.

No, right now it’s about how many goals they’re not scoring – they’ve been held to two or fewer in three of their last six games and six of their last 11. Nick Bjugstad, who was knocked out of Friday’s game with an injury late in the second period, has one goal this season. Zach Aston-Reese and Teddy Blueger have done a lot of good things on a shutdown line, but they’ve combined for two goals in the last 13 games. Dominik Simon has one goal in the last 13 games.

It’s not even close to enough. That’s five regular forwards in major dry spells, and a power play that has lost its way. So they need more goals, and they certainly need more early in the games. They’ve allowed the first goal in 12 of their last 14 games heading into tonight’s home date with Toronto, and while they deserve full marks for fighting through a recent series of multi-goal deficits to earn points, they also have to be faulted for constantly chasing games.

Malkin will play a large role in any success the Penguins have while they fight through their current rash of injuries. He’s playing a smarter game, he’s scoring (seven points in eight games) and he’s been more responsible defensively. But he simply can’t do it alone.